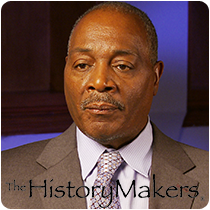 Favorite Color:
Blue
Favorite Food:
Steamed Crabs
Favorite Time of Year:
Summer
Favorite Vacation Spot:
Beaches
Favorite Quote:
Seek ye first the kingdom of God, and his righteousness; and all these things shall be added unto you.

Favorite Color:
Blue
Favorite Food:
Steamed Crabs
Favorite Time of Year:
Summer
Favorite Vacation Spot:
Beaches
Favorite Quote:
Seek ye first the kingdom of God, and his righteousness; and all these things shall be added unto you.

See how J. Terry Edmonds is related to other HistoryMakers

Speechwriter Terry Edmonds was born on September 9, 1949 in Baltimore, Maryland. The son of Naomi Parker, a waitress, Edmonds grew up in the projects of Baltimore’s inner-city. He spent time in a foster home and his family was on welfare for a number of years, but Edmonds went on to be the first in his family to attend college. He graduated from Morgan State University in 1973, with his B.A. degree in English.

In 1978, Edmonds was hired as a public relations and communications specialist at the Maryland Transit Administration. Then, in 1982, he took a position as director of public relations for Trahan, Burden and Charles Advertising. While working at Trahan, Burden and Charles, Edmonds also served as director of communications at the Joint Center for Political Studies, a Washington, D.C. think tank, from 1985 until 1987. In 1987, he was hired as a press secretary in the office of Kweisi Mfume, at that time a newly elected United States representative from Maryland. Edmonds worked in public relations for Macro Systems in 1988, Blue Cross and Blue Shield in 1989, the University Research Corporation in 1990, and R.O.W. Sciences in 1991. Then, in 1993, he was hired as a senior speechwriter for the United States Secretary of Health and Human Services, Donna Shalala. After serving under Shalala for two years, Edmonds worked as a speechwriter for President Bill Clinton in 1995, making him the first African American speechwriter for a United States President. In 1997, Edmonds was promoted to deputy director of speechwriting, and, in 1999, he was appointed by President Clinton as the director of speechwriting and assistant to the president.

In 2002, Edmonds was hired as the director of editorial management at AARP, and, in 2005, he served as the executive speechwriter for Time Warner, Inc. Edmonds then went on to work as a speechwriter for the Corporation for National and Community Service, as well as the senior advisor and speechwriter for NASA Administrator Charles Bolden. He was also appointed associate vice president and editorial director of Columbia University.

Terry Edmonds was interviewed by The HistoryMakers on October 26, 2013.

See how J. Terry Edmonds is related to other HistoryMakers
Click Here To Explore The Archive Today!