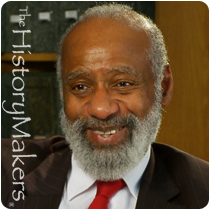 See how J. K. Haynes is related to other HistoryMakers

Biologist and academic administrator John K. “J.K.” Haynes was born on October 30, 1943 in Monroe, Louisiana to John and Grace Haynes. His mother was a teacher and his father was the principal of Lincoln High School in Ruston, Louisiana. Haynes began first grade when he was four years old. When he was six, his family moved to Baton Rouge, Louisiana and Haynes began attending Southern University Laboratory School. He attended Morehouse College when he was seventeen and he received his B.S. degree in biology in 1964. Haynes aspired to attend medical school. However, a professor advised him to apply to graduate school and he went on to attend Brown University, where he obtained his Ph.D. degree in biology in 1970.

Haynes completed his first year of postdoctoral research at Brown University, where he worked on restriction enzymes. During this time, he became interested in sickle cell anemia, which led to a second postdoctoral appointment in biochemistry at Massachusetts Institute of Technology (MIT), where he worked with Vernon Ingram, the scientist who discovered the amino acid difference between normal and sickle cell hemoglobin. In 1973, Haynes joined the faculty at the Meharry Medical School as a junior faculty member in the department of genetics and molecular medicine and the department of anatomy. His research was focused on why sickle cells were less deformable than normal. In 1979, he returned to Morehouse College as an associate professor of biology as well as the director of the Office of Health Professions. As part of his work, Haynes created a program for high school students interested in medical school. Haynes has also helped recruit minority students into science with the assistance of agencies like the National Science Foundation (NSF), the Howard Hughes Medical Institute (HHMI), and the National Institutes of Health (NIH). Haynes became the endowed David E. Packard Chair in Science at Morehouse College and chairman of the biology department in 1985. In 1991, he took a sabbatical and went to Brown University to continue his work on sickle cells. Since 1999, he has served as Dean of Science and Mathematics at Morehouse College.

Under Haynes administrative leadership, new buildings for both chemistry and biology were built at Morehouse College as well as a curriculum with an emphasis on lab work. Haynes has published papers on cell biology as well as on undergraduate STEM education.

See how J. K. Haynes is related to other HistoryMakers
Click Here To Explore The Archive Today!