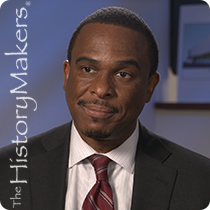 Favorite Color:
Blue
Favorite Food:
Lobster
Favorite Time of Year:
Summer
Favorite Vacation Spot:
Palm Beach, Florida
Favorite Quote:
If Your Mind Can Conceive It And Your Heart Believe It Then You Can Achieve It.

Favorite Color:
Blue
Favorite Food:
Lobster
Favorite Time of Year:
Summer
Favorite Vacation Spot:
Palm Beach, Florida
Favorite Quote:
If Your Mind Can Conceive It And Your Heart Believe It Then You Can Achieve It.

See how Ivan Yaeger is related to other HistoryMakers

Inventor and nonprofit executive Ivan Yaeger was born on June 7, 1967 in Miami, Florida to Elliott Yaegar, Jr. and Ollie Yaegar. He attended Miami Shores Elementary School and North Miami Junior High School before he graduated from Miami Central Senior High School in 1984. Yaeger went on to earn his B.B.A. degree in business management and organization from the University of Miami in 1988.

While at the University of Miami, Yaeger filed his first patent for the Yaeger Prosthetic Arm, a prosthetic arm controlled through activating sensors on the human body. He also began the Yaeger Innovative Products Corporation in 1996 and became its chief executive officer. In 1991, Yaeger began working as a pupil advocate for AESOP, a mentoring program for minorities within Miami Dade Public Schools. Yaeger then founded the Yaeger Foundation, Inc. in 1995 which in 1997 started the Technology Leaders Initiative, a workshop program for students of all ages. During the same year, Yaegar became the corporate relations manager for INROADS, Inc. In 2000, Yaeger founded Yaeger Companies, which combined all of his previous endeavors under the name of one company. He gained national attention when he created prosthetic arms for an eleven-year-old named Diamond Excell, who was born without arms. Yaeger filed another patent in 2006, for a mechanical hand kit that was used in the Technology Leaders Initiative.

In addition to his work with the Yaeger Foundation, Yaeger also served his community through service on a variety of boards that included the Wellness Committee for Miami Dade Public Schools and the Miami Children’s Initiative.

Ivan and The Yaeger Arm have appeared in over one hundred broadcasts and publications such as The Today Show, National Medical Association Journal, M.I.T Inventor of the Week Archive, The Johns Hopkins Newsletter, Jet magazine, People magazine and the United States Patent & Trademark Office’s website and Minority Inventors: America’s Tapestry of Innovation video.

Yaeger has been recognized and honored for his innovations and community involvement many times. In 1992, he received the Father Surrogate of the Year Award from the Urban League. In 2002, the U.S. Patent Office named him as a distinguished innovator. He was also the recipient of the ICON Award in 2006 and the Distinguished Achievement Award in 2011. Yaeger was inducted into the Miami Dade Public Schools Hall of Fame in 2017.

Ivan Yaeger was interviewed by The HistoryMakers on March 10, 2017.

See how Ivan Yaeger is related to other HistoryMakers
Click Here To Explore The Archive Today!