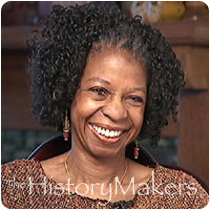 See how Iva Carruthers is related to other HistoryMakers
Donate Now

Noted educator and social advocate Iva A. Carruthers was born on April 5, 1945, in Chicago, Illinois. Carruthers attended the University of Illinois at Chicago, graduating in 1967 with B.A. degrees in sociology and French. After completing her undergraduate studies, Carruthers enrolled at Northwestern University in Evanston, Illinois, receiving both an M.A. in counselor education and a Ph.D. in sociology in 1972.

After finishing graduate school, Carruthers became a professor of sociology at Northeastern Illinois University in Chicago. In 1979, while still teaching, Carruthers founded Nexus Unlimited, an information and educational technology firm, and served as the company's president.

Carruthers has also become well known for using her ministry as a vehicle for addressing social issues, particularly those involving people of African descent both here and abroad. She authored The Church and Reparations - An African American Perspective, which was distributed at the 2001 United Nations World Conference Against Racism, Racial Discrimination, Xenophobia, and Related Intolerance, where she also served as a delegate. In December of that year, Carruthers became president of the Urban Outreach Foundation, a nonprofit, interdenominational organization that assists African and African American communities with education, healthcare and community development.

Carruthers is a recipient of numerous awards, honors, and postdoctoral fellowships, such as the 1999 Life Achievement Award from Northeastern Illinois University; the 2000 Woman Entrepreneur of the Year Award, from the National Foundation of Women Legislators and the Small Business Administration; and Ebony's Outstanding Mother Award for Mentoring in 2001. She is a frequent guest speaker at the national and international level, an author and editor of numerous publications, and serves as a trustee for several organizations, including the Chicago Theological Seminary and the John Henrik Clarke Institute for African Research. In 2001, she received a master's degree in theological studies from Garrett Evangelical Theological Seminary in Evanston, Illinois.

A widow of the late Ralph Wells, Carruthers is the mother of two sons.

See how Iva Carruthers is related to other HistoryMakers
Donate Now
Click Here To Explore The Archive Today!