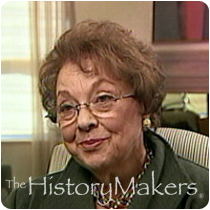 See how Isobel Neal is related to other HistoryMakers

Born Isobel Hoskins July 28, 1933 in New York City, Neal attended PS70 in Brooklyn and graduated from Franklin K. Lane High School in 1951. Neal studied at the University of Michigan from 1951 to 1953, but returned to Brooklyn and earned her B.A. degree in History from New York University in 1955. That same year, she married Attorney Earl Langdon Neal and moved to Chicago.

In Chicago, Neal taught at Mason, Shakespeare and Beethoven public schools beginning in 1955. From1965 to 1975, she taught homebound students. In 1977 she received a M.A. in Anthropology/Archaeology form University of California at Santa Barbara. Neal also volunteered on the boards of various cultural institutions and organizations including: the Illinois Arts Alliance, DuSable Museum of African American History, the Illinois Humanities Council, New Regal Theatre, Cultural Center Foundation and Art Resources in Teaching. Her involvement with the annual "Black Creativity" art exhibit at Chicago's Museum of Science and Industry inspired her to develop her own gallery.

In 1986 Isobel Neal opened The Isobel Neal Gallery. Featured artists over the years have included: William Carter, Jonathan Green, Geraldine McCullough, Madeline Rabb, Elizabeth Catlett, Herbert House, Norman Lewis, Bennie Andrews, Reese Bennett and many others. The Isobel Neal Gallery identified and cultivated a hidden community of black art lovers while creating a venue for quality art. Neal retired from the gallery in 1996, passing the mantle of Chicago representation for many of the artists on to George R. N’Namdi. Still active as a curator of art shows, Neal lives in Chicago with husband, Earl, where she enjoys time with her four grandchildren.

See how Isobel Neal is related to other HistoryMakers
Click Here To Explore The Archive Today!