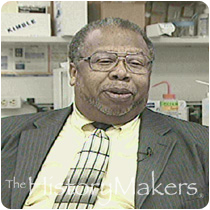 See how Isiah M. Warner is related to other HistoryMakers

Chemistry professor and research chemist, Isiah M. Warner was born in DeQuincy, Louisiana, on July 20, 1946 to Humphrey and Erma Warner. He developed an interest in science and mathematics early on and conducted his first experiment by drinking kerosene to see why it created light. Warner graduated as valedictorian of his class from Bunkie, Louisiana's Carver High School in 1964. Warner's interest in chemistry was ignited after participating in a summer program at Southern University in Baton Rouge during high school. He went on to earn his B.S. degree in chemistry in 1968 from the same intuition, and went to work as a technician for Battelle Northwest, a private company in the state of Washington that contracted with the Atomic Energy Commission. Warner earned his Ph.D. degree in analytical chemistry from the University of Washington in 1977.

From 1977 to 1982, Warner served as assistant professor of chemistry at Texas A&M University. He was the first African American on the chemistry faculty there. After five years, he achieved tenure and was promoted to associate professor. While at Texas A&M, he researched fluorescent spectroscopy. Warner then joined the faculty at Emory University where he was promoted to full professor in 1986. He served as the Samuel Candler Dobbs professor of chemistry from 1987 until 1992. During the 1988-89 academic year, Warner went on leave to the National Science Foundation where he served as program officer for analytical and surface chemistry. In 1992, Warner joined the faculty at Louisiana State University as the Philip W. West Professor of analytical and environmental chemistry and was promoted to chair of the chemistry department, vice-chancellor for strategic initiatives, and Boyd professor. At LSU, Warner focused his research on chiral drugs and natural drug derivatives.

Throughout his career, Warner published over 230 articles in revered journals, has given hundreds of presentations, and is the holder of five patents. In addition to his own speaking and publishing activities, Warner has chaired over thirty doctoral theses and mentored many students. Warner’s awards included the CASE Louisiana Teacher of the Year Award in 2000; the 2000 LSU Distinguished Faculty Award; and the 1997 Presidential Award for Excellence in Science, Mathematics, and Engineering Mentoring from President Clinton.

See how Isiah M. Warner is related to other HistoryMakers
Click Here To Explore The Archive Today!