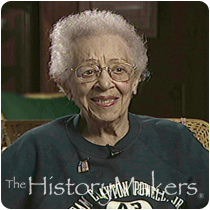 See how Isabel Powell is related to other HistoryMakers

Isabel Washington Powell was born in Savannah, Georgia, May 23, 1908, one of five children born to Hattie Washington, a dancer, and Robert T. Washington, a postal worker. At a young age, Powell was sent to a Catholic boarding school run by the Sisters of the Blessed Sacrament in Cornwell Heights, Pennsylvania. After finishing her formal education, Powell moved to New York City and followed in the footsteps of an older sister, Fredi Washington, to become a dancer and actress. Powell performed as a showgirl in the nightclubs of Harlem during the Harlem Renaissance before dancing, singing, and acting in three Broadway shows in the late 1920s and early 1930s.

In 1934, Powell married Adam Clayton Powell, Jr. and assisted him in his election to the New York Council and as senior pastor of Abyssinian Baptist Church in Harlem. In 1944, Powell helped her husband become the first African American elected to the United States Congress from the east coast. In 1945, the Powells’ marriage ended in divorce. Powell went on to serve as a teacher’s aide in New York’s Harlem community public schools for over thirty years.

From 1945 on, Powell had a significant social and community presence on the Island of Martha’s Vineyard, Massachusetts; she was noted for bringing together people of various races, ages, classes, and cultural and ethnic backgrounds. Powell was also recognized for promoting the political legacy of Adam Clayton Powell, Jr.

Powell was the mother of one son, Preston Powell. Powell passed away on May 1, 2007, just shy of her ninety-ninth birthday.

See how Isabel Powell is related to other HistoryMakers
Click Here To Explore The Archive Today!