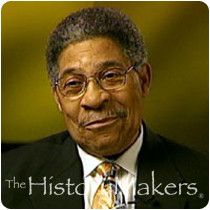 See how Isaac "Redd" Holt is related to other HistoryMakers

World-class musician Isaac Redd Holt was born on May 16, 1932, in Rosedale, Mississippi. He attended public schools in Chicago and received advanced musical instruction at the Chicago School of Music in the early 1950s. Holt's interest in drums and percussion began as a child, and Holt bought his first drum set when he was a sophomore at Crane Technical High School. He graduated from high school in 1951 and attended the Cosmopolitan School of Music in Chicago. In the 1980s, Holt attended Kennedy-King College to study radio and television.

Between 1954 and 1966, Holt was part of the original Ramsey Lewis Trio, with which he created the hit singles "Hang on Sloopy" and "In Crowd." He was co-founder and leader of Young-Holt Unlimited from 1966 to 1974, with which he created another hit, "Soulful Strut," and the successful single, "Wack Wack," which was used in the movie Harriet the Spy and various other movies and commercials. Since 1974, he has been the leader and owner of Redd Holt Unlimited. He continues to wow audiences with his percussion and vocal skills, performing at jazz clubs, festivals, theaters and concerts around the world.

As a jazz educator, Holt has been active for many years in Urban Gateways, a nonprofit organization that provides multicultural performing, visual and literary arts programs for children, teachers and parents in the Chicago area. Holt acts as an arts ambassador to school children to help improve the quality of their education by exposing them to his music and engaging them in creating, appreciating, and reflecting on his art form.

From 1980 to 1985, Holt directed the Gumption Performing Artists Workshop for artists to enhance their talents. Holt has received various awards and honors including the Jazz Master Award from the Midwest Arts, a Lifetime Achievement Award from Indianapolis Radio Sounds of Jazz, and Grand Master of Time Award in 1997 from the Jazz Institute of Chicago and the DuSable Museum of African American History.

He married his childhood sweetheart, Marylean, in 1954. They have three children, Isaac Lamont, Ivan Damoune and Reginald Lamar.

See how Isaac "Redd" Holt is related to other HistoryMakers
Click Here To Explore The Archive Today!