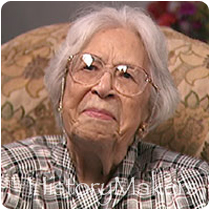 See how Irma Josephine Barber is related to other HistoryMakers

Irma Josephine Barber was born Irma Josephine Mason on March 13, 1904, in New Orleans, Louisiana. Raised Catholic by her parents, Barber enjoyed attending a private Catholic school and planned to become a nun. When her father, who had supported the family by working for the city of New Orleans, died, she had to leave school to help her mother, brother and three sisters. In 1918, the family moved to Chicago, seeking greater opportunity. In the city, Barber and her sisters were able to earn money working as seamstresses.

Barber was living in the Black Belt when the murder of a young black man at the 31st Street Beach triggered the infamous Chicago Race Riot of 1919. The riot went on for days. She later married and stayed at home to raise her four children. When her husband died in 1949, Barber took a job as a calculator in the Chicago Department of Forestry. She worked for the Forestry Department for thirty-eight years before finally retiring at age eighty-three.

Her four children rated as Barber's greatest successes. All four of her children went on to earn advanced college degrees and worked as teachers. The oldest, Shirley Dillard, worked as a teacher and assistant principal before retiring. Daughter Barbara Bonner was a teacher of special education before her death. Barber's only son, Vaughn Barber, taught school before earning a law degree and starting his own firm, from which he retired. The youngest of Barber's children, Beverly Martin, was a retired teacher who taught at Truman College and DePaul University.

Barber and her family were members of the NAACP. She was an excellent seamstress before her diminished vision forced her to give up sewing, and she also enjoyed gardening and tending to her roses. A devoted Catholic, Irma Barber was a member of St. Thomas the Apostle Catholic Church.

See how Irma Josephine Barber is related to other HistoryMakers
Click Here To Explore The Archive Today!