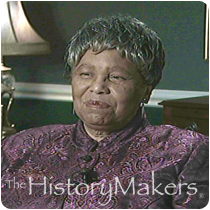 Educator Ione Teresa Dugger Vargus was born on July 19, 1930 in Medford, Massachusetts. The daughter of the late Lt. Col. Edward Dugger and Madeline Dugger, the 1952 Massachusetts Mother of the Year, Vargus has continued her family’s dedication to education, family and public service. In 1952, she received her B.A. degree in sociology from Jackson College at Tufts University, and in 1954, she received her M.A. degree from the University of Chicago’s School of Social Service Administration. That same year, Vargus began working professionally with families for non-profit organizations. In 1969, she extended her work to include the academic world of higher education. Completing her studies in 1971 at the Florence Heller School for Advanced Studies in Social Welfare at Brandeis University, Vargus received her Ph.D.

At Brandeis University, Vargus served as assistant professor in the newly formed Black Studies Department from 1969 to 1971, as well as in the Heller School. Afterwards, she held the position of assistant professor at the University of Illinois where she served as the Director of the School Community Pupils Project. In 1977, Vargus published a book entitled, Revival of Ideology: The Afro-American Society Movement and in 1978, she became the first academic African American dean at Temple University.

In 1986, Vargus began researching African American family reunions. She interviewed families from the eastern, northern and southern parts of the United States in order to determine the reasons and benefits of family reunions. In addition, she produced a radio documentary on family reunions for station WRTI; as well as organized the Conference on African American Family Reunions. In 1990, Vargus founded the Family Reunion Institute at Temple University, an organization which boasts being the only one of its kind in America to focus exclusively on strengthening extended families. A recognized authority on family reunions, Vargus has been featured in numerous magazines, newspapers and on radio and television shows across the country.

From 1991 to 1993, Vargus served as Vice Provost for Undergraduate Education at Temple University. In 2005, Vargus was the keynote speaker at the inauguration of the 2015 Procter & Gamble Black Family Reunion Time Capsule, which collected artifacts donated by leading Philadelphia businesses, academic institutions and civic groups.

Vargus resides in the Philadelphia area where her daughter, Suzanne Holloman, is the Dean of Workforce Development and Continuing Education at a community college, and her son is Billy Vargus, the weekend sports anchor for Philadelphia’s Fox 29-TV. Vargus also has three granddaughters.

Vargus was interviewed by The HistoryMakers on December 19, 2006.

See how Ione Teresa Vargus is related to other HistoryMakers
Donate Now
Click Here To Explore The Archive Today!