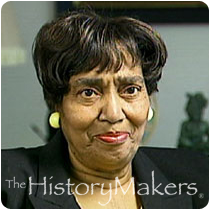 Favorite Color:
Blue
Favorite Food:
Spaghetti
Favorite Time of Year:
Spring
Favorite Quote:
Do what you can and do it well.

Favorite Color:
Blue
Favorite Food:
Spaghetti
Favorite Time of Year:
Spring
Favorite Quote:
Do what you can and do it well.

See how Iola McGowan is related to other HistoryMakers
Donate Now

Iola McGowan, former vice chairman of the Illinois State Democratic Party and Chicago Park District Commissioner, was born Iola Stewart on September 8, 1936, in Chicago, Illinois. Proud of her West Side roots, McGowan graduated from Farragut High School in 1954. In the years following graduation, McGowan started a family and began to spearhead neighborhood efforts in her area. Inspired by another black woman, the late head of Midwest Community Council, Nancy Jefferson, McGowan became more involved in public life. Although a conscientious wife and mother, a determined McGowan did not let family life stop her from pursuing her education. She earned her B.A. degree in inner city studies from Northeastern Illinois University in 1980.

McGowan started at the precinct level of local government ascending up the ranks of the Democratic Party to become the director of Consumer Services for the City of Chicago under Mayor Jane Byrne. McGowan served in that capacity for a six-year term, managing a budget of $900,000. As director of Consumer Services, she headed the Model Cities Community Services program and successfully funded proposals totaling approximately $1 million. In addition, she developed an innovative classroom coloring-book aimed at teaching children how to buy food. The Federal Food Program adopted McGowan's book. McGowan served as commissioner and vice president of the Chicago Park District and vice chairman of the Illinois State Democratic Party.

She is a member of the National Organization of Negro Business and Professional Women's Clubs, the Chicago Council on Fine Arts City Arts Panel and Community Development Program for the Austin Area and the Chicago Chapter of the Coalition of Labor Union Women. McGowan is still a valued consultant and activist in the Austin community.

See how Iola McGowan is related to other HistoryMakers
Donate Now
Click Here To Explore The Archive Today!