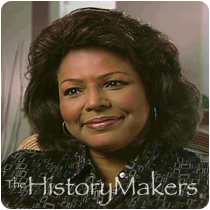 See how Iola Johnson is related to other HistoryMakers
Donate Now

Iola Vivian Johnson was born on October 10, 1950, in Texarkana, Arkansas, to Horace and Eurea Lee Johnson. Her father was a respected land owner and rancher. Johnson’s family moved to a predominantly white neighborhood Tucson, Arizona, when she was four years old. She attended Mills Elementary School and Mansfield Junior High School. Johnson graduated from Tucson High School in 1968 and attended the University of Arizona. She has degrees in political science and journalism.

Johnson was the first woman and the first African American to write for the ten o’clock news for the NBC affiliate KBOA in Tucson, Arizona. In 1973, Johnson was approached to take a position with WFAA-TV in Dallas, Texas. She worked her way to becoming the first woman and the first black news anchor in Dallas. Johnson worked for WFAA-TV for more than 12 years, where she and co-anchor Tracy Rowlett had the longest running and most successful news anchor team in the history of the Dallas-Fort Worth television industry. Johnson became the highest paid local news anchor and the “Most Popular Woman in Dallas” according to Dallas Magazine.

Johnson left her job at the television station in 1984 to start her own business. A couple of years later, Johnson became the morning news anchor at radio station KKDA in Dallas, after spending a year in St. Louis, Missouri. She reappeared on television in 1990, where she once again teamed up with Tracy Rowlett, this time at the CBS affiliate in Dallas. She later became the host of a weekly community affairs show, Positively Texas on KTVT-TV in Dallas.

Johnson has been recognized numerous times for her excellence in journalism. She also received the Life Time Achievement Award from the Dallas-Forth Worth Association of Black Communicators.

See how Iola Johnson is related to other HistoryMakers
Donate Now
Click Here To Explore The Archive Today!