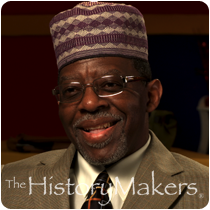 Religious and civic leader Vernon M. Fareed was born on December 31, 1953 in Norfolk, Virginia. Throughout his childhood, his parents instilled strong values that followed him through his life, despite segregation. Raised a Christian, he joined the Nation of Islam at the age of eighteen. He converted to the traditional form of Islam in 1975.

In 2000, Fareed became a member of the Virginia Center for Inclusive Communities (VCIC). He went on to become the chair of the Tidewater Chapter and serve on its state board. In 2005 Imam Fareed became the first Muslim of African-American descent to offer the invocation for the Virginia State Senate. Fareed also wrote for the New Journal and Guide newspaper in 1983 as a columnist, and he currently serves as the Manager and President of Salaam Investment Group, LLC. Since 1976, Fareed has been the Imam of Masjid [Mosque] William Salaam which helps to serve almost 6,000 Muslims in the Hampton Roads’ community.

For his religious work, Fareed received an Honorary Doctoral Degree from Bishop Jessie Featherston at Trinity Mission University in 1997. He also received VCIC’s National Humanitarian Award in 2006 for his community involvement. Fareed has served on many boards including the Ministers Advisory Committee to Norfolk’s Police Chief, the FBI Multi-Cultural Advisory Board and Religions for Peace RFP-USA, the largest representative interreligious organization in the world. In addition, he was selected as the National Convener of the Sectional Imams in 2009. Fareed wrote the spiritual book Uniformity in Prayer published in 2008.

Vernon Fareed was interviewed by The HistoryMakers on May 12, 2010.

See how Imam Vernon Fareed is related to other HistoryMakers
Donate Now
Click Here To Explore The Archive Today!