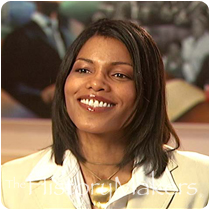 See how Ilyasah Shabazz is related to other HistoryMakers
Donate Now

Author of Growing Up X, Ilyasah Shabazz, the third eldest daughter of Malcolm X and Betty Shabazz was born in July 1962. She was nearly three years old when her father, Malcolm X was assassinated on February 21, 1965 at the Audubon Ballroom. After her father’s death, the family moved to Mount Vernon, New York where she attended private schools, went to summer camp and belonged to Jack and Jill. In 1979, Shabazz graduated from The Masters School, a prestigious boarding school, in Dobbs Ferry, New York. She received her B.S. degree in biology from the State University of New York in New Paltz in 1983 and her M.S. degree in education and human resource development from Fordham University in New York.

Shabazz began her professional career in the entertainment industry. She served as Vice President for SME Entertainment; Director of Operations for KEDAR Entertainment; Coordinator of Promotions & Marketing for Pendulum, and as a production assistant for 40 Acres and a Mule Filmworks (Spike Lee’s production company). Shabazz then moved her efforts from the entertainment business towards education. As the coordinator for the Office of Academic Affairs of the City University of New York, she organized training workshops to encourage higher education for inner-city high school dropouts. Her mission was to create an atmosphere and a curriculum that enabled students to feel proud and have a strong sense of commitment to humanity and to improving their socioeconomic conditions.

Shabazz wrote an autobiography in 2002, Growing Up X. It is a coming of age story as well as a tribute to her parents’ lives. In 2005, Shabazz worked with a team from Columbia University to open the Malcolm X and Betty Shabazz Memorial and Education Center at the Audubon. She also accompanied President Bill Clinton on his historic tour to South Africa.

Shabazz lives in Mt. Vernon, New York where she serves on the youth board for the City of Mt. Vernon and is a member of the Women's Leadership Forum.

Ilyasah Shabazz was interviewed by The HistoryMakers on September 21, 2005.

See how Ilyasah Shabazz is related to other HistoryMakers
Donate Now
Click Here To Explore The Archive Today!