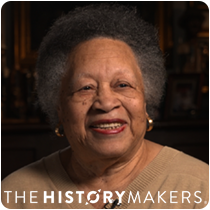 Journalist Ida E. Lewis was born on September 22, 1934 in Malvern, Pennsylvania to Grace Walker Lewis and Samuel Lewis. She graduated from Swarthmore High School in Swarthmore, Pennsylvania in 1952. Then, she earned her bachelor’s degree in public relations and journalism from Boston University in 1956.

Lewis began her career as a reporter at the New York Amsterdam News in 1957. Later, she was hired at the African American-owned newspaper The New York Age, where she stayed until 1961. After leaving The New York Age, she worked as a director of research at Small Investors Real Estate Plan, Inc. Then, Lewis moved to Paris, France, where she lived for six years. During that time, she worked as a contributing writer for publications including Le Monde, Le Figaro Litteraire and Jeune Afrique. She also interviewed African dignitaries for the British Broadcasting Corporation; reported from Africa on assignment with Life magazine; and wrote her first essay collection, The Deep Ditch and The Narrow Pit. In 1969, Lewis returned to the United States as a correspondent for Jeune Afrique. The following year, she became the second editor-in-chief of Essence magazine. In 1971, Lewis left Essence, and founded the international news publication Encore, where she and Nikki Giovanni interviewed Biafran leader Chukwuemeka Odumegwu Ojukwu. Following the magazine’s closure in 1979, Lewis joined the faculty of the Columbia University Graduate School of Journalism. Lewis worked from the mid-1980s as a political media consultant and press agent for clients such as Ross Perot, Abraham Hirschfeld and Adam Clayton Powell IV. In the 1990s, Lewis became the first female editor-in-chief of the NAACP’s The Crisis magazine. She also then began teaching as an adjunct professor of journalism at the Boston University College of Communication, where in 2005, she created the Ida E. Lewis Scholarship Fund to support minority students in journalism.

During her career, Lewis published several articles, including “Black Mask of Angry Africa” in Life magazine; “The End of Integrationism: Neither Assimilation, nor Secession, Black Americans Engage in a New Way” in Jeune Afrique; and “Who Is an African American” in The New Crisis.

Lewis was the recipient of the Award for Excellence in Journalism from the Association for the Study of Afro-American Life and History. She also received the Woman of Distinction Award from the Kingsborough Community College of the City University of New York.

Ida E. Lewis was interviewed by The HistoryMakers on December 6, 2017.