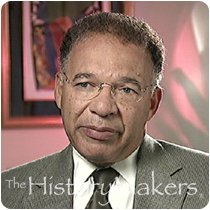 See how Hugh Price is related to other HistoryMakers

Former Urban League CEO Hugh Price is descended from Boston’s celebrated fugitive slave, George Latimer, and his son, Lewis Howard Latimer on his mother’s side of the family. Price was born November 22, 1941 in Washington, D.C. and grew up around the campus of Howard University where his father, Dr. Kline Price, practiced medicine. He attended Blanche K. Bruce Elementary School, Georgetown Day School and graduated from Coolidge High School in 1959. He graduated from Amherst College in 1963, and that summer served as a marshal for the March On Washington. He finished Yale University Law School in 1966, and in the process of offering low-income legal services to the Black Coalition of New Haven, became its first executive director.

Price joined Cogan Holt and Associates in 1970 to evaluate programs for the Ford Foundation and worked in community development. By 1976, he was Human Resources Commissioner for New Haven, and in 1978, Price moved his family to New York to take a position on the New York Times Editorial Board. Leaving in 1982 to become senior vice president of WNET/13, Price moved on to join the Rockefeller Foundation as vice president of philanthropy in 1988. There, he instituted the National Guard Youth Challenge and the Coalition of Community Foundations for Youth. As CEO of the National Urban League, Price established the Institute for Opportunity and Equality and revived Opportunity. He has been a director of Metropolitan Life, Inc., Sears, Roebuck and Co. and a member of the Corporate Governance Committee of NYNEX Corporation. He is currently senior advisor and co-chair of the Nonprofit and Philanthropy Practice Group for the law firm of Piper Rudnick.

Price is the author of Getting Your Child the Best Education Possible and Destination: the American Dream. The recipient of many honors and awards, Price lives in with his family in New Rochelle, New York.

See how Hugh Price is related to other HistoryMakers
Click Here To Explore The Archive Today!