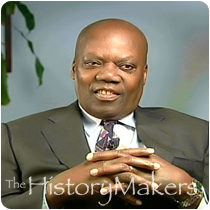 Favorite Color:
Blue
Favorite Food:
Paella
Favorite Time of Year:
Summer
Favorite Vacation Spot:
Hawaii
Favorite Quote:
Give It Your Best Shot And After That, Let It Be.

Favorite Color:
Blue
Favorite Food:
Paella
Favorite Time of Year:
Summer
Favorite Vacation Spot:
Hawaii
Favorite Quote:
Give It Your Best Shot And After That, Let It Be.

See how Hugh C. Burroughs is related to other HistoryMakers
Donate Now

Hugh C. Burroughs was born on February 6, 1940, in Trinidad & Tobago. His father, Vernon Burroughs, was a shoemaker and shoe repairman. His mother, Evalina, was a homemaker. Burroughs is the eldest of five children. He attended elementary and high school in Trinidad, graduating from high school at the age of sixteen. Between 1957 and 1962, Burroughs worked as a civil servant. He moved to New York City in 1962 to study economics at Columbia University. Burroughs received both his undergraduate and graduate degrees from Columbia. In 1967, he began work at the university as an assistant dean of students. In this position, Burroughs gained experience speaking with various foundations that donated funds to the university.

Burroughs was then hired as the Associate Director of the Martin Luther King Jr. Fellowship Program at the Woodrow Wilson Foundation. In 1971, he worked as an executive staff member at the John Hay Whitney Foundation. He was invited to California in 1977 to be a Program Officer at the William and Flora Hewlett Foundation. While working at the Hewlett Foundation, he created a series of grants that encouraged the development of the City of East Palo Alto in California. Burroughs later became vice-president of the Henry J. Kaiser Family Foundation. He left the Kaiser Foundation to work for the David & Lucile Packard Foundation as Director of External Affairs. Burroughs managed the relationships with government officials, the public at large and other nonprofit leaders.

In 2000, music legend Berry Gordy asked Burroughs to head the Berry Gordy Family Foundation. In 2003, Burroughs decided to work as a part-time foundation management consultant. During his thirty-five year long philanthropic career, he has been a member and chair of the Association of Black Foundation Executives and served as a board member of the Council on Foundations, Northern California Grantmakers, Hispanics in Philanthropy, and Women in Philanthropy.

See how Hugh C. Burroughs is related to other HistoryMakers
Donate Now
Click Here To Explore The Archive Today!