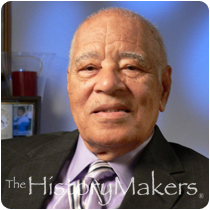 See how Huel D. Perkins is related to other HistoryMakers
Donate Now

Retired educator Huel Davis Perkins was born on December 27, 1924 in Baton Rouge, Louisiana. Between 1943 and 1946, Perkins served in the U.S. Navy as a musician first class. He graduated from Southern University with highest honors in 1947.

From 1948 to 1950, Perkins worked as a music instructor at Lincoln University in Jefferson City, Missouri. Perkins then served as an associate professor of music at Southern University from 1951 through 1960. During this time, Perkins also completed his M.A. degree in music from Northwestern University in 1951 and his Ph.D. from Northwestern University in 1958. From 1968 to 1978, Perkins served as the Dean of the College of Arts and Humanities at Southern University. In addition, Perkins was appointed as the deputy director of education programming at the National Endowment for the Humanities in Washington, D.C. in 1978. Perkins then commenced a long tenure at Louisiana State University where he served as Assistant Vice Chancellor for Academic Affairs from 1979 through 1990 and as Executive Assistant to the Chancellor and Special Assistant to the Chancellor from 1990 through 1998. In 1996, President Bill Clinton appointed Perkins to the Board of Advisors of the J.W. Fulbright foreign scholarship program. He served in this capacity until 2002. Perkins then founded Huel D. Perkins & Associates, Inc., a consulting firm and speakers bureau. He serves as its president. Perkins has also served as Chairman on the Education Foundation of Alpha Phi Alpha Fraternity and has served as Grand Sire Archon of Sigma Pi Phi Fraternity. In 2005, Louisiana State University acknowledged Perkins’ years of service by awarding him the honorary Doctor of Humane Letters and naming a doctoral fellowship program after him.

Perkins has also been honored by the Louisiana Endowment for the Humanities (Humanist of the Year); the National Conference of Christians and Jews (Brotherhood Award); the LSU Chapter of Phi Delta Kappa (Outstanding educator); the Baton Rouge Human Relations Council (Brotherhood Award); the Istrouma Area Council of Boy Scouts of America (Citizen of the Year); the Louisiana Chapter of NAACP (A. P. Turead Award); the Alpha Phi Alpha Fraternity (Award of Merit) and received the Centennial Award given by Sigma Pi Phi Fraternity. He has served as a member of the President’s Board of Advisors on Historically Black Colleges and Universities. Perkins has critiqued and published numerous books and articles on the African American experience in America. He has served on several dozen boards dealing with social and educational issues including the Baton Rouge Symphony, Louisiana Public Broadcasting, Corp., and the New Orleans Museum of Art. Perkins is the recipient of many public service awards for his achievements both in the civic and academic communities.

Perkins is married to Thelma O. Smith. 2008 marks the couple’s sixtieth wedding anniversary. They have one child, Huel Alfred Perkins.

Perkins was interviewed by The HistoryMakers on March 26, 2008.

See how Huel D. Perkins is related to other HistoryMakers
Donate Now
Click Here To Explore The Archive Today!