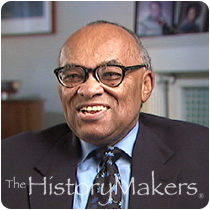 "Life Is Not A 60-Yard Dash. It's A Marathon And Staying The Course Is The Secret To It All."

Hubert Eugene Jones, better known as “Hubie,” shaped and defined the civic and social landscape of Boston for more than forty-five years. He played a leadership role in the formation, building and rebuilding of at least thirty community organizations within Boston’s Black community and across all neighborhoods in the city.

Born in the Bronx neighborhood of New York City on December 13, 1933, Jones came to Boston in 1955 after graduating from the City College of New York. Growing up in the South Bronx, he was inspired by his mother Dorcas, who earned her high school diploma, a B.A. degree and a master’s degree after raising him and his siblings. His father, Hilma, a Pullman Porter, was also an inspiration as he worked along side A. Philip Randolph in organizing the Brotherhood of Sleeping Car Porters. Randolph even gave the eulogy at his father’s funeral. At CCNY, Jones was inspired by the famed psychologist Dr. Kenneth Clark, whose psychological studies with Black and White children helped bring about the 1954 Supreme Court decision, Brown v. Board of Education.

After receiving a master’s in social work from Boston University, Jones moved through a series of positions in Boston social work agencies. Starting at Boston Children’s Services in 1957, he left for Judge Baker Guidance Center in 1961, and in 1965, he became the director of the Roxbury Multiservice Center, where he remained until 1971. Under Jones, RMC became a national model for neighborhood-based social services for low-income city residents.

While serving as RMC’s director in 1967, Jones noticed a pattern of children who were not going to school in Boston. He led a formal investigation and published a scathing indictment of the Boston Public Schools for systematically excluding 10,000 children because they were physically or mentally disabled, had behavioral problems, did not speak English or were pregnant. The task force report, The Way We Go to School: The Exclusion of Children in Boston, led to the groundbreaking enactments of two landmark laws in Massachusetts, the Special Education Law and the Bilingual Education Law, to protect the rights of and give appropriate education services and instruction to special needs children. The task force, chaired by Jones, became known as the Massachusetts Advocacy Center, now the Massachusetts Advocates for Children.

Jones spent the 1971-1972 year as the Whitney M. Young, Jr. Community Fellow at MIT, and from 1972 until 1977 he was an associate professor in the department of urban studies and planning at MIT. He then became the first African American appointed to a deanship at Boston University, serving as the dean of the School of Social Work from 1977 to 1993.
Between 1995 and 2002, Jones served as special assistant to the chancellor for urban affairs at the University of Massachusetts, Boston. In 2002, he founded the Boston Children’s Chorus, consisting of eighty young people from diverse ethnic and socio-economical backgrounds.

Jones has been honored numerous times for his dedication to children’s advocacy, and friends and colleagues have established The Hubie Fund, to benefit ongoing social concerns in Boston.