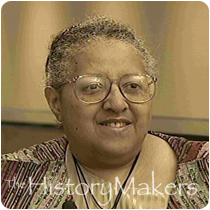 See how Howardena Pindell is related to other HistoryMakers
Donate Now

Visual artist and curator Howardena Pindell was born on April 14, 1943, in Philadelphia, Pennsylvania. Pindell became interested in art at an early age when she began taking art classes on Saturdays; she started out as a figurative painter. Pindell received her B.F.A. degree in painting from Boston University's School of Fine and Applied Arts in 1965, and her M.F.A. degree from Yale University's School of Art and Architecture in 1967. Pindell was also awarded two honorary doctorates: one from the Massachusetts College of Art, and one from Parson School of Design in New York.

Pindell’s earliest drawings, composed of a patterned sequence of words and numbers on graph paper, suggest post minimalism as a major ingredient in her abstractions. In the 1970s, Pindell developed a collage technique using small circles hand punched from sheets of blank or printed paper. After numbering each one individually, she pasted them on sheets of punched and un-punched paper so that they floated on surfaces at once porous and solid. In the 1980s, she moved to photo-based collage, video, and relief paintings with intensely political subject matter. Pindell traveled extensively to Africa, Asia, Europe, Russia, Latin America, and the Caribbean, lived in Japan for seven months, and in India for four months. Pindell used these journeys and experiences as inspiration to integrate her own history as content for the autobiographies of her life. Between 1995 and 1999, Pindell taught at Yale University as a visiting professor; from 2003 to 2006, she served as Director of the MFA Program at Stony Brook University. Pindell also served as a full Professor of Art at Stony Brook University.

Pindell’s belief that the arts community should become more inclusive of women and minorities sparked a revolution in her work; she published groundbreaking studies that documented the lack of representation of artists of color through racism, censorship and violence.

Pindell works are in the collection of the Metropolitan Museum of Art, New York, the Museum of Modern Art, the Whitney Museum of American Art, the Yale Art Museum, New Haven, the Fogg Art Museum, Harvard University, and the Rhode Island School of Art Museum. Pindell also became an accomplished writer; a book of her writings, The Heart of the Question, was published in 1997. In 2000 Pindell received the IAM Pioneer award.

See how Howardena Pindell is related to other HistoryMakers
Donate Now
Click Here To Explore The Archive Today!