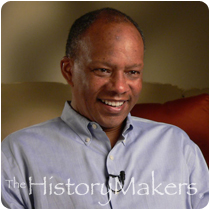 Favorite Color:
Blue
Favorite Food:
Pizza
Favorite Time of Year:
Summer
Favorite Vacation Spot:
Outer Banks, North Carolina
Favorite Quote:
If You Put Your Mind To It, You Can Do It.

Favorite Color:
Blue
Favorite Food:
Pizza
Favorite Time of Year:
Summer
Favorite Vacation Spot:
Outer Banks, North Carolina
Favorite Quote:
If You Put Your Mind To It, You Can Do It.

See how Howard Woolley is related to other HistoryMakers
Donate Now

Telecommunications industry lobbyist Howard Woolley is senior vice president of wireless public policy and government relations for Verizon. His family roots are in government and entertainment. Woolley’s mother, Ora Leak Woolley, was a Katherine Dunham dancer. In the mid-1940s, she appeared in Show Boat with Buddy Ebsen on Broadway and Finian’s Rainbow in London. Herman Woolley, a World War II veteran, was active in local politics and helped establish the Frederick Douglass political club and the Langston Hughes Library in their community in Queens, New York. Although both of his parents were Ohio natives, Woolley was born in New York City in 1957.

In the mid-1960s, Woolley’s parents transferred him from the local public school in Queens to the Downtown Community School in Manhattan’s Greenwich Village. Upon graduation, he was accepted into the Bronx High School of Science. A college internship at a local television station launched him on a path to the S.I. Newhouse School of Public Communications at Syracuse University, where he studied television and radio broadcasting. While obtaining his B.S. degree from the Newhouse School, he met his future wife, Gail Campbell.

Following his graduation from Syracuse University, Woolley was hired into membership sales by the National Association of Black-Owned Broadcasters in 1980. His work caught the attention of the National Association of Broadcasters (NAB). Woolley was hired by the NAB to work on increasing opportunities for minorities in the industry. With the help of senior executives of the NAB and advice from his uncle, a lobbyist for a multinational oil company, he transitioned into government relations in 1984. Woolley also obtained his M.A.S. degree in management from Johns Hopkins University during this period.

Woolley is a member of the Executive Leadership Council, an organization of senior African American corporate executives. Woolley serves on the advisory boards of the S.I. Newhouse School of Public Communications and the Johns Hopkins Carey Business School Leadership Development Program. He serves on the Board of Directors of the World Affairs Council, Congressional Black Caucus Foundation, Everybody Wins – D.C., and the Community Academy Public Charter School. Woolley also serves as a Trustee of the National Urban League and a Corporate Advisory Board member of the National Council of La Raza.

Woolley and his wife, Gail, are active in charities and have established an endowment for minority students at the S.I. Newhouse School of Public Communications. They live in Potomac, Maryland.

See how Howard Woolley is related to other HistoryMakers
Donate Now