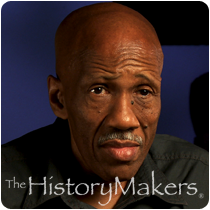 Favorite Food:
Thai Food
Favorite Time of Year:
Summer
Favorite Vacation Spot:
Chicago, Illinois
Favorite Quote:
Seize The Time. Let Not The Moments Wane. So Precious Is This Day That Even Now It Slips Into Eternity.

Favorite Food:
Thai Food
Favorite Time of Year:
Summer
Favorite Vacation Spot:
Chicago, Illinois
Favorite Quote:
Seize The Time. Let Not The Moments Wane. So Precious Is This Day That Even Now It Slips Into Eternity.

See how Howard Simmons is related to other HistoryMakers

Commercial photographer and photojournalist Howard Simmons was born on June 11, 1943 in Pittsburgh, Pennsylvania. His mother, Lillian, was a day worker from South Carolina while his father, Luther, was a contractor from Pennsylvania. Simmons and his older sister Margaret were often moving around as children. In 1961, Simmons graduated from Westinghouse High School in Pittsburgh, Pennsylvania. Immediately after graduation, Simmons enlisted in the U.S. Air Force where he played French horn with Air Force service bands until 1966. While serving, he became interested in photography and began photographing arrangements he would make with various materials from the barracks.

In 1966, Simmons began working for Gateway Studios as a photo lab technician with the desire to become a commercial photographer. The following year, he compiled a portfolio and presented it to Ebony magazine where John Johnson hired him as a staff photographer. With Ebony, Simmons covered Reverend Martin Luther King Jr.’s funeral in Atlanta and Coretta Scott King’s subsequent rally in Washington D.C. In 1968, friend Bob Black told Simmons the Chicago Sun-Times was hiring so Simmons joined the staff doing photojournalism until 1976. In 1973, Simmons, John White, Ovie Carter, and Bob Black created the exhibit “Through The Eyes of Blackness” which displayed the everyday life of blacks.

In 1976, Simmons left the paper to become a self-employed commercial photographer. He did advertisements for Coca Cola, McDonalds, Sears, Folgers, Amoco, Kelloggs and others traveling as far as Zimbabwe and Paris. In 1980, Simmons shot the first cover for Black Family magazine and in 1983, he bought a building in Chicago and turned it into what became his favorite commercial photography studio. Simmons work is showcased on his website, HowardSimmonsPhotography.com, opened in 2009.

Simmons is married to Marva E. Simmons and together they have three children: Robbin L. Mugnaini, Tracey L. Mcghee, and Christie R. Edwards.

Howard Simmons was interviewed by The HistoryMakers on May 25, 2010.

See how Howard Simmons is related to other HistoryMakers
Click Here To Explore The Archive Today!