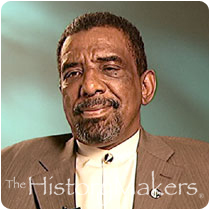 See how Howard Saffold is related to other HistoryMakers
Donate Now

Reformer Howard Saffold, a former police officer who has dedicated his life to correcting wrongs in the criminal justice system, was born on January 26, 1941 in Chicago, Illinois to Eva and DeWitt Saffold. Saffold held odd jobs while attending Farragut High School. Upon graduation in 1959, he joined the U.S. Army. He married Carol Randall Saffold in 1960 and completed his military service in 1962. Saffold worked as an expediter for the regional office of the U.S. Department of Veterans Affairs before the Chicago Police Department hired him as a beat officer in 1965.

As a police officer, Saffold faced discrimination and witnessed police brutality, causing him to contemplate resigning. When the Afro-American Police League was founded in 1968 by Renault Robinson, he immediately joined, recruited others and eventually served as the League's president. When a 1976 court decision forced the Chicago Police Department to change its discriminatory hiring and promotional practices, membership soared. In 1978, Saffold co-founded the National Black Police Association, serving as its president as well. In 1979, he co-founded Positive Anti-Crime Thrust with fellow Afro-American Police League leader Renault Robinson; promoting cooperation between police and the communities they serve.

When Harold Washington unsuccessfully ran for mayor of the City of Chicago in 1977, Saffold provided security on a volunteer basis. When Washington ran again and won in 1983, one of Mayor Washington's first official acts was to name Saffold as chief of executive security, making Saffold responsible for selecting, training and assigning personnel. Saffold served in the same capacity for Mayor Eugene Sawyer after Mayor Washington's untimely death.

In 1991, Saffold retired from the Chicago Police Department and resurrected the Positive Anti-Crime Thrust. As CEO, he attempts to stem the flow of young black men into the prison system.

Saffold holds a B.S. in Business Administration from Chicago State University and an M.A. in urban studies from Northeastern Illinois University. He was honored by the Midwest Community Council in 1988, the Peoria Afro-American Police League in 1993 and the South Austin Coalition in 1994. He consults community organizing initiatives and community-based organizations, including prison ministries and public schools.

See how Howard Saffold is related to other HistoryMakers
Donate Now
Click Here To Explore The Archive Today!