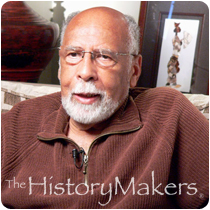 See how Howard Moore, Jr. is related to other HistoryMakers
Donate Now

Attorney Howard Moore, Jr. was born on February 28, 1932 in Atlanta, Georgia to Bessie Sims Moore and Howard Moore, Sr. Growing up on Fort Street, his paper route sent him down Auburn Avenue where he encountered many of Atlanta’s prominent citizens, including Colonel Austin T. Walden, the dean of the black lawyers. When his mother left to work at a Lorain, Ohio steel plant, Moore lived with his aunt. He attended David T. Howard School, graduating in 1950. Attending Morehouse College, Moore wanted to be a journalist like Atlanta Daily World’s Lerone Bennett but was drawn to political science where he was taught by Dr. Robert Brisbane and Hugo Skala. Earning his B.A. degree in political science in 1954, he served in the United States Army until 1956. Moore worked for a while in Cleveland, Ohio, and then obtained his LL.B degree from Boston University School of Law in 1960.

After serving as a clerk for United States District Court Judge Charles E. Wyzanski, Jr., Moore was admitted to practice law in Massachusetts in 1961. Returning to Atlanta, he and was hired by the black firm of Hollowell and Ward in 1962, later joining the firm of Moore, Alexander and Rindskopf. As one of only ten black lawyers in Georgia, Moore worked long hours and traveled on Sundays with Vernon Jordan. As SCLC, SNCC and CORE applied pressure on local, state, and federal government to recognize racial equality, the pro-NAACP lawyers in Georgia, including Donald Hollowell, A.T. Walden and Moore remained involved in promoting anti-discrimination laws. The passage of the Civil Rights Act (1964) and Voting Rights Act (1965) eliminated legal discrimination in the public sphere. Moore was involved with the NAACP Legal Defense Fund in the cases of Georgia v. Peacock and Georgia v. Rachel. These 1966 victories taken to the United States Supreme Court used federal civil action to counterattack against unconstitutional attempts to use state law to prevent citizens from exercising their rights. Moore also represented Julian Bond in his successful fight to take his historic seat in the Georgia House of Representatives, also in 1966. He was also part of the NAACP team in the 1970 Supreme Court Decision of Turner v. Fouche.

Moore was the attorney for Angela Davis from 1971 to 1977, moving to Berkeley, California to become a part of the defense team with Leo Branton, Margaret Burnham, and Doris Brin Walker. In 1986, the National Bar Association filed an amicus curiae brief protesting the criminal contempt conviction of Moore, who was cited and fined $5,000 because of a question asked of a witness during the case, United States v. Albert Turner, et al. The conviction of Moore would have had a chilling effect upon the African American lawyer's rights.

Married to Jane Bond Moore, he has formed Moore and Moore and practices law in Oakland, California. They have three grown children.

Moore was interviewed by The HistoryMakers on April 14, 2007.

See how Howard Moore, Jr. is related to other HistoryMakers
Donate Now
Click Here To Explore The Archive Today!