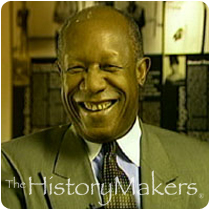 See how Howard Dodson is related to other HistoryMakers

Historian and lecturer Howard Dodson was born June 1, 1939, in Chester, Pennsylvania. After completing high school in 1957, he attended West Chester State College, where he studied social studies and English, with an emphasis on secondary education. Graduating in 1961, he went on to Villanova University where he earned an M.A. in U.S. history and political science in 1963. Currently, Dodson is a Ph.D. candidate at the University of California, Berkeley.

Upon earning his master's degree, Dodson went to Ecuador in 1964 as part of a Peace Corps assignment where he was the director of credit union education programs for the National Credit Union Federation. In 1967, Dodson moved to Washington, D.C., and became the director of minority recruitment and deputy director of campus recruiting for the Peace Corps, where he remained for a year. Dodson became the executive director of the Institute of the Black World in Atlanta in 1974, remaining there until 1979. At the same time, he taught classes at Emory University. Dodson returned to Washington, D.C., in 1979 as a consultant to the National Endowment for the Humanities. However, he remained active with the Institute of the Black World, working as a project director on a number of programs until 1984. After leaving the NEH, Dodson was hired as the director of the Schomburg Center for Research in Black Culture at the New York Public Library. Under his guidance and direction, the Schomburg Center sustained tremendous growth.

Dodson has been active throughout his life in a number of other projects. He was part of the Black Theology Project Conference held in Cuba, which brought Fidel Castro into the religious community for the first time in decades. He has produced a number of exhibitions and festivals celebrating black history and African American life. Dodson is also the author of several books and articles and the recipient of numerous awards, including being named to the President's Commission on the National Museum of African American History and Culture and the Malcolm X Museum Award. He serves on the board of directors of the Apollo Theater Foundation and the UNESCO Slave Route Project, among many others.

See how Howard Dodson is related to other HistoryMakers
Click Here To Explore The Archive Today!