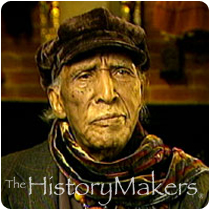 Howard "Louie Bluie" Armstrong was born on March 4, 1909, in Dayton, Tennessee, to Daisy and Thomas Armstrong. Armstrong's great-grandfather was a slave owner, and his grandparents were slaves. His father, a gifted musician, artist and preacher, worked as a furnace man at the LaFollette Iron and Coal Company in eastern Tennessee to support his wife and nine children. He taught his children to play a variety of musical instruments, and Armstrong learned to play the mandolin, fiddle and guitar, among others during his childhood. Armstrong's father had a gift for languages and learned to speak Italian, German, Polish and Spanish from the European immigrants working at the blast furnace. Armstrong shared this gift with his father. It was during his childhood that Armstrong also started drawing and painting, using homemade paints and brushes.

As a teenager Armstrong played blues, country, hokum and ragtime with his brothers in local bands, and in 1929 he recorded with bluesman Sleepy John Estes and string band leader Yank Rachell. With Ted Bogan and Carl Martin he formed the Martin, Bogan & Armstrong Trio and in 1933 they migrated north to Chicago, performing at the World's Fair, working as street musicians and recording music.

After serving in the U.S. Army during World War II, Armstrong worked as an assembly-line spot welder for the Chrysler Corporation in Detroit to support his family. After he retired in 1971, the Martin, Bogan & Armstrong Trio reunited, performing and recording several albums throughout the decade until Martin's death in 1979.

Armstrong was fluent in seven languages and was know for his fiddle and mandolin playing, but could play twenty-two different instruments. He was the subject of two documentary films, Louie Bluie (1985) and Sweet Old Song (2002), and received a National Heritage award from the National Endowment for the Arts.