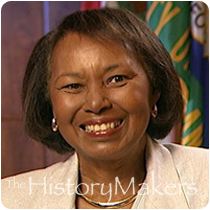 "It is going to be alright."

In the course of her long public service career, Yvonne Brathwaite Burke has made significant contributions to improve the quality of life for minorities, women and the poor. Burke’s college education began at the University of California, Berkeley, in 1949. She transferred to the University of California, Los Angeles, in her junior year. In 1956, Burke received her J.D. from the University of Southern California Law School, graduating in the top third of her class. In law school, when Burke was refused admission to the women’s law society, she and two Jewish female law students started a rival organization. She also played a key role in organizing a legal defense team for those charged in the Watts Riots in 1965 and was soon appointed by the governor to the McCone Commission to investigate the causes of the riots.

Burke’s political career began in 1966 with her election as the first African American assemblywoman, representing the 63rd Assembly District of California. She served for three terms. Throughout her tenure in the California legislature, she was an ardent supporter of prison reform, childcare, equal opportunities for minorities and women, and education. Burke grew frustrated with the unresponsiveness of the state legislature and successfully campaigned for a seat in California’s 37th Congressional District in 1973. This gave Burke the distinction of being the first African American female elected to the U.S. Congress from California.

Burke served as Los Angeles County supervisor for the Second District, a position she has held since 1992. As a member of the Board of Supervisors, Burke has focused her efforts on improving the lives of children, encouraging economic development and improving transportation in Los Angeles. Burke held this position until her retirement in 2008.

Burke has amassed numerous distinctions and honors throughout her public service career. She became the first African American female to serve as chairperson of the L.A. County Board of Supervisors in 1993. She was vice chairperson of the 1972 Democratic National Convention, past chairman of the L.A. Federal Reserve Bank and vice chairman of the 1984 U.S. Olympics Organizing Committee. Time named Burke one of America’s 200 Future Leaders, and she was selected Woman of the Year by both the Los Angeles Times and UCLA.