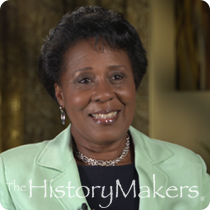 Political leader Yvonne Atkinson Gates was born on June 10, 1956 in Henderson, Nevada to Bobbie Davis Atkinson and Eddie Atkinson. Gates graduated from Ed W. Clark High School in Las Vegas and went on to earn her B.S. degree in political science and journalism in 1979, her M.P.A. degree in 1982, and her Ph.D. degree in public administration in 2012, all from the University of Nevada, Las Vegas.

Following her graduation from the University of Nevada, Las Vegas, Gates worked as the research and planning manager for Clark County’s Department of Social Service, as well as personnel manager for Clark County’s Department of Aviation. From 1985 to 1992, Gates served on the Clark County School District Board of Trustees in Las Vegas. In 1992, Gates was elected as the youngest and only minority member to serve on the Clark County Board of Commissioners for District D in Las Vegas, becoming its first African American female chair in 1995. She was chosen as a super-delegate for the Democratic National Committee; and, in 2002, she chaired the Democratic National Committee Black Caucus. As chairwoman, she worked with black female elected officials like Donna Brazile and Minyon Moore to found the Women Building for the Future Political Action Committee. Throughout her political career, Gates advocated for strengthening public education and daycare programs nationwide. After resigning from the Clark County Board of Commissioners in 2007, Gates was appointed by Senator Harry Reid to serve as a Democratic National Committee super-delegate in 2008 for Hillary Rodham Clinton, although Gates later shifted her support to Barack Obama. In addition to her political career, Gates founded the construction firm of ECO Construction LLC in Las Vegas.

Gates was a recipient of the Community Image Award from the Professional Black Women Alliance in 1989, and a recipient of the Community Service Award from the Westcoast Black Publisher's Association in 1990. In recognition of her public service, the Clark County Board of School Trustees opened the Yvonne Atkinson Gates Center in 1996. In 1997, Gates was named Outstanding Democrat of the Year by the Democratic Party of Nevada. In 2002, she received an Eleanor Roosevelt Award from the DNC Women's Vote Center; and in 2006, she received a human rights award from Church Women United.

Yvonne Atkinson Gates was interviewed by The HistoryMakers on September 25, 2016.

See how The Honorable Yvonne Atkinson Gates is related to other HistoryMakers
Click Here To Explore The Archive Today!