Information about The Honorable Wilson Frost 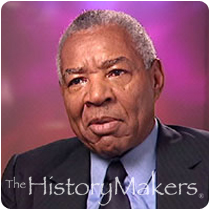 Longtime Chicago politician Wilson Frost was born in Cairo, Illinois, on December 27, 1925, and earned his bachelor's degree from Fisk University in 1950. He attended Chicago-Kent College of Law, earning his J.D. in 1958. He later studied at DePaul University's Lawyer's Institute.

After graduating from Fisk, Frost was hired by the Postal Transportation Service as a clerk, where he remained until 1952. That year, he left to work at Provident Hospital as a statistician. After earning his law degree, Frost joined the firm of Frost, Sherard, Howse & Coleman, where he continued on as a partner until 1973. That year, he left to form Meyer & Frost, which later became Frost & Greenblatt. He remained there until his retirement in 1998.

Frost became active in the Chicago political machine in 1967, winning election as alderman of the 21st Ward. In 1971, he was elected alderman of the 34th Ward, and in 1976 he was serving as the president pro tem of the City Council. With the death of longtime mayor Richard J. Daley in 1976, Frost pointed out that under existing law he was to become the new mayor. The other aldermen disagreed, and after the course of several meetings, Frost was kept out of the mayor's seat and instead was named the chairman of the Finance Committee of the City Council. Following the incident, Frost continued to serve the city, retiring in 1998 with the title of commissioner of the Cook County Board of Tax Appeals.

During his many years of public service, Frost was honored by many organizations, including the Original Forty Club, which awarded him the Man of the Year Award in 1974, and the Illinois House of Representatives, which issued a resolution praising his work upon his retirement. Frost also actively served various organizations, including the John Marshall School of Law and Mercy Hospital Medical Center. He also served as vice president of the City Club of Chicago. Frost and his wife, Gloria, had four children.

See how The Honorable Wilson Frost is related to other HistoryMakers
Donate Now
Click Here To Explore The Archive Today!