Information about The Honorable Willie Logan 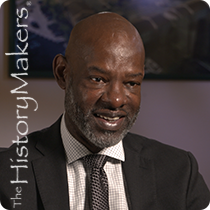 See how The Honorable Willie Logan is related to other HistoryMakers

Political leader Willie Logan was born on February 16, 1957 in Miami Beach, Florida to Willie Logan, Sr. and Ruth Logan. He graduated from high school in 1975, earned his A.A. degree from Miami-Dade College in Miami, Florida in 1976, and his B.S. degree in accounting from the University of Miami in 1977. He later earned his M.B.A. degree in health care administration from the University of Miami in 1996.

Logan worked in the insurance industry and volunteered for various political campaigns. In 1980, Logan founded the Opa-locka Community Development Corporation and became its president and chief executive officer. He was elected as mayor of Opa-locka, Florida, making him the youngest mayor in the United States at the time. Logan served as mayor of Opa-locka until 1982, when he was elected to the Florida House of Representatives. In 1997, Logan was designated by Democratic Party leadership to be the next House Speaker and became the first African American to hold that position. Logan founded the Logan Consulting Group in 1992. In 2000, Logan ran for United States Senate as an independent candidate but ultimately lost the election. He continued to serve as president and chief executive officer of Opa-locka Community Development Corporation.

In the Florida legislature, Logan chaired numerous committees, including the Criminal Justice Budget Committee and the Committee on Finance and Taxation. He served as House Democratic Leader-elect in 1997. He was also a member of the Appropriations and Rules Committees and was the immediate past chair of the Miami-Dade County Legislative Delegation, the Legislature’s largest delegation.

Logan has been invited as a featured speaker on the subject of community development, including the Future of Places International Conference on Streets as Public Spaces and Drivers of Urban Prosperity in Argentina and the Project for Public Spaces Conference on Public Markets in Spain. He has also published a chapter entitled, “Revitalization & Transforming the Community,” in the book Shifting from Objects to Places. Logan also served on the Child Service Council and the Performing Arts Council in the Miami-Dade area.

Willie Logan was interviewed by The HistoryMakers on March 8, 2017.

See how The Honorable Willie Logan is related to other HistoryMakers
Click Here To Explore The Archive Today!