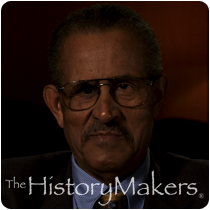 See how The Honorable William E. Ward is related to other HistoryMakers

In 1963, Ward moved to Chesapeake where he began his public life as a grass-roots political organizer, helping to bring sewer and roads to poorer neighborhoods in Chesapeake and Norfolk. Between 1973 and 2000, he worked as a professor at Norfolk State University where he served as a professor and the chair of the history department. He was also the president of the Faculty Senate at Norfolk State University between 1975 and 1977 and chaired the Black History Month committee for the Faculty Senate of Virginia Benefits and Senate Grievance committees. In addition, Ward was a member of the college-wide Council of Teacher Education. In 1978, Ward ran for the Chesapeake City Council and was declared a winner forty-eight hours after having been declared a loser, when 123 uncounted votes were located. He was elected Vice Mayor under Mayor David I. Wynne between 1984 and 1986, and also in 1988 and 1990. Ward was then appointed as the city’s first black mayor in 1990 after Wynne faced allegations of fraud. Ward ran for re-election in 1992 and won and in 1996, Ward ran for re-election and defeated Republican challenger John Cosgrove, earning fifty-five percent of the vote and serving until 2004. Ward was Chesapeake’s longest serving mayor.

Ward was appointed to the Board of Visitors at Virginia State University in 2003 by Governor Mark Warner and in 2008 became a board member of the university. In addition, he served as the Executive Director of the Hampton Roads Partnership, Hampton Roads Economic Development Alliance, Hampton Roads Planning District Commission, and Southeastern Public Service Authority. Additional past professional affiliations include the Virginia Society for History Teachers, the Association for the Study of Negro Life and History, the Southern Historical Association, the American Historical Association and the Virginia Social Sciences Association. Ward also served as the chairman of the Chesapeake Hurricane Katrina Relief Task Force.

Ward lived in Virginia and was married to Rose M. Ward. He was also the father of son, Michael, and daughter, Michelle.

William Ward was interviewed by The HistoryMakers on May 12, 2010.

See how The Honorable William E. Ward is related to other HistoryMakers
Click Here To Explore The Archive Today!