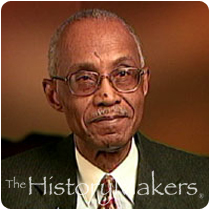 See how The Honorable William Cousins, Jr. is related to other HistoryMakers

Like many Chicagoans, William Cousins, Jr., had his roots in the South. Cousins was born in 1927, in Swiftown, Mississippi. His family moved to Memphis, Tennessee and then to Chicago. Cousins graduated from DuSable High School on the city’s South Side in 1945. He received his B. A. degree in political science from the University of Illinois, where he graduated with honors in 1948. Cousins then went on to Harvard Law School, receiving his LL.B. in 1951.

Cousins served his country as an infantry lieutenant in the U.S. Army from 1951 to 1953. He continued as an active army reservist for twenty years and retired as a lieutenant colonel. Cousins began practicing law in 1953 as an attorney with the Chicago Title & Trust Company. From 1957 to 1961, he served as a Republican Assistant State’s Attorney. Cousins entered private practice with the law firm of Turner, Cousins, Gavin and Watt. In 1967, Cousins was elected as a “Free Democratic” alderman from Chicago’s Eighth Ward.

As an alderman, Cousins worked outside of Chicago’s powerful political machine and was reelected as an independent until 1976, when he ran for Circuit Court Judge of Cook County and won. Over the next twenty-six years, Cousins presided as a judge on the Illinois Appellate Court and the Cook County Circuit Court. He was also appointed to various positions, including chairman of the Illinois Judicial Conference and as a member of the Special Supreme Court Committee on Capital Cases. While working as a judge, Cousins also served as Chairman of the Illinois Judicial Council, Chairman of the Judicial Council of the National Bar Association and as a Board member of the National Center for State Courts.

Before election to the judiciary, Cousins dedicated his time and talents to an array of organizations and causes, including Chicago Area Planned Parenthood Association and Operation PUSH.

In 2005, Hiroko, Cousins’ wife for fifty-two years, made her transition to eternal life. He had four adult children: Cheryl, Noel, Yul and Gail and four grandchildren.

See how The Honorable William Cousins, Jr. is related to other HistoryMakers
Click Here To Explore The Archive Today!