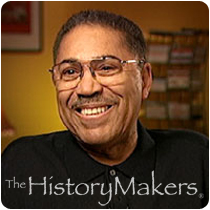 See how The Honorable William Clay, Sr. is related to other HistoryMakers
Donate Now

Former Congressman William Lacy Clay, Sr., was born on April 30, 1931, in St. Louis, Missouri, to Luella Hyatt and Irving Clay. Growing up with six siblings in a St. Louis tenement, Clay excelled in school; however, at age thirteen, he went to work, taking a job as a janitor in a clothing store where he would later become the tailor. Clay eventually graduated from St. Louis University in 1953 with his B.S. degree in political science; he served in the United States Army until 1955. Between 1955 and 1959, Clay worked as a real estate broker in St. Louis, and from 1959 to 1961 as a manager of Industrial Life Insurance Company. Clay then became active in the Civil Rights Movement; during his activities as a Civil Rights activist, he served a total of 105 days in jail for taking part in a demonstration in 1963.

Clay became active in local politics, and was eventually elected to the St. Louis Board of Aldermen in 1959; he continued to serve as an alderman for the 26th Ward until 1964, at which time he resigned to become a union official and ward politician. In 1968, Clay was elected to Congress, becoming the first African American elected from Missouri and one of only two African American representatives who had been elected from states west of the Mississippi River at that time. Clay served sixteen terms in Congress, gaining a reputation for his streetwise urban politics and strong ties to organized labor.

One of the founders of the Congressional Black Caucus, Clay wrote a comprehensive treatise on the history of African American members of Congress titled: Just Permanent Interests: Black Americans in Congress, 1870-1991. Clay married his wife, Carol Ann Johnson, in 1953 in St. Louis; the couple had three children, Vicki Flynn, William Jr., and Michelle Katherine. Clay’s son William went on to his father's former congressional seat.

See how The Honorable William Clay, Sr. is related to other HistoryMakers
Donate Now
Click Here To Explore The Archive Today!