Information about The Honorable Wellington Webb 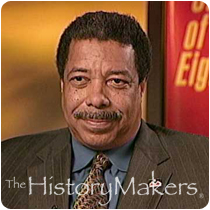 Wellington E. Webb, the first African American Mayor of Denver, was born on February 17, 1941, in Chicago. The Webb family relocated to the Northeast section of Denver, where the imposing six-foot, five-inch youth became active in sports. Webb was an all-conference basketball player at Northeastern Junior College in Sterling, Colorado, in 1960. He obtained his B.A. in sociology from Colorado State College at Greeley in 1964 and his M.A. in sociology from the University of Northern Colorado at Greeley in 1971.

Webb was turned down twice for teaching positions in the Denver public schools. He was working as a forklift operator when he sought advice from his grandmother, Helen M. Gamble, who was active in the community affairs of northeast Denver. Following her advice, he went to city hall and was offered a job. She taught Webb about political involvement and political clout. Webb’s political career had begun.

In 1972, Webb was elected to the Colorado House of Representatives, representing his boyhood home in northeast Denver. In 1977, Webb was selected by President Jimmy Carter to serve as regional director of the U.S. Department of Health Education and Welfare. In 1981, Colorado Governor Richard Lamm appointed Webb to his cabinet as executive director of the Department of Regulatory Agencies. Webb was elected Denver city auditor in 1987, where his track record paved the way for his successful and historic mayoral bid in 1991.

In his three terms as mayor of Denver, Webb has focused on four major areas: parks and open space, public safety, economic development and children. During his administration there was a record forty percent decrease in crime, as unemployment dipped below two percent. Webb’s development projects include the new Denver International Airport, a new sports stadium, expansion of the Denver Art Museum and a new African American research library.

Webb is president of the Democratic Mayors and the past president of the U.S. Conference of Mayors and National Conference of Black Mayors. He lectures frequently on civic issues and was a guest lecturer at Harvard University’s Kennedy School of Government. Webb collaborates closely with his wife, former Colorado State Representative Wilma J. Webb.

See how The Honorable Wellington Webb is related to other HistoryMakers
Donate Now
Click Here To Explore The Archive Today!