Information about The Honorable Valerie Jarrett 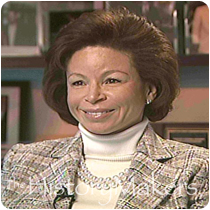 See how The Honorable Valerie Jarrett is related to other HistoryMakers

Lawyer, businessperson, and civic leader Valerie Bowman Jarrett was born Valerie Bowman, November 14, 1956, in Shiraz, Iran to education expert Barbara Bowman and Dr. James Bowman, a pathologist and pioneering geneticist. Her maternal grandfather was Chicago housing legend, Robert Taylor. Moving from Iran to London, Jarrett attended Tetherdown Elementary School. Returning to the United States, she attended Shaesmith University of Chicago Lab School and graduated from Northfield Mount Hermon School in Massachusetts in 1974. Jarrett received her B.A. degree in psychology from Stanford University in 1978 and obtained her J.D. degree from the University of Michigan Law School in 1981.

Beginning her career as a corporate banking associate at Chicago’s Pope, Ballard, Shepherd, and Fowle, Jarrett then joined the real estate department of Sonnenschein, Carlin Nath and Rosenthal. In 1987, she was tapped to serve as deputy corporation counsel for finance and development for the City of Chicago under Mayor Harold Washington and continued service under Mayor Eugene Sawyer and Mayor Richard M. Daley. From 1988 to 1989, Jarrett also served as director of Leadership Greater Chicago. In 1991, she served as Mayor Daley’s deputy chief of staff. Jarrett was appointed Chicago’s commissioner of planning and development where she consolidated three departments and was awarded the Women’s Business Development Center’s Government Support Award. In 1995, Mayor Daley appointed her as chairman of the Chicago Transit Authority where she served for eight years and was responsible for a budget of over $800 million. That same year, Jarrett was appointed Vice President of the Habitat Company. In 2003, Jarrett was elected to a three-year term as chairman of the Chicago Stock Exchange. In 2007, Jarrett was named president of the Habitat Company.

A longtime advisor of President Barack Obama, Jarrett served as co-chairperson of the Obama-Biden Presidential Transition Team. She is Senior Advisor and Assistant to the President for Intergovernmental Affairs and Public Liaison.

See how The Honorable Valerie Jarrett is related to other HistoryMakers
Click Here To Explore The Archive Today!