Information about The Honorable Vaino Spencer 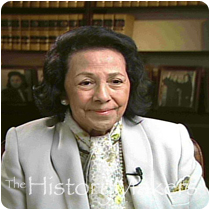 See how The Honorable Vaino Spencer is related to other HistoryMakers

Superior Court Judge Vaino Hassan Spencer was born on July 22, 1920 in Los Angeles, California to Ada Nona and Abdul Hassan. Spencer graduated from Polytechnic High School in Los Angeles in 1938, and went on to receive her A.A. degree from Los Angeles City College in 1949. Spencer earned her L.L.B. degree from Southwestern University School of Law in 1952.

After obtaining her law degree, Spencer worked as a general practice attorney at law in Los Angeles until 1961. She then became the first African American woman to serve on the bench in California as the Municipal Court Judge for the Los Angeles Judicial District. Spencer served in this capacity until 1976, then was appointed as the Los Angeles County Superior Court Judge, a position she held until 1980.

In 1979, Spencer and fellow presiding justice Joan Dempsey Klein, founded the National Association of Women Judges, an organization intended to help promote women candidates on the bench. Spencer and Klein traveled around the country and met with judges, bar leaders, politicians and journalists to discuss the need for more women in the court room. The organization eventually set up a lecture series and established an annual conference for the association’s growing membership.

In 1980, Spencer began serving as the Presiding Judge of the Division One California Court of Appeal, Second Appellate District, a position she held for over twenty years.

Throughout her career, Spencer served on a number of judicial and law oriented boards, including the Judicial Council Justice Planning Committee, the Judicial Council of California, the Los Angeles County Commission on Justice and the California Law Revision Committee. Additionally, Spencer received various accolades for her groundbreaking law work, including the Outstanding Jurist Award in 2001, Metropolitan News-Enterprise’ Person of the Year Award in 1991, and the 1985 Trailblazer Award from the National Association of Business and Professional Women.

Spencer was interviewed by The HistoryMakers on November 22, 2006.

See how The Honorable Vaino Spencer is related to other HistoryMakers
Click Here To Explore The Archive Today!