Information about The Honorable Toni Preckwinkle 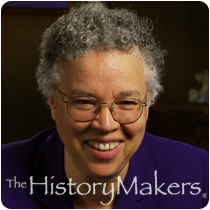 See how The Honorable Toni Preckwinkle is related to other HistoryMakers

Cook County Board President Toni Preckwinkle was born in St. Paul, Minnesota on March 17, 1947. She attended Gorman Elementary School and Como Park Jr. High School. Preckwinkle graduated from Washington High School in St. Paul in 1965. She then moved to Chicago to attend the University of Chicago, where she graduated with her B.A. degree in general studies in 1969. Preckwinkle graduated with her M.A.T. degree in teaching from the University of Chicago in 1977.

After being hired as a history teacher for Chicago Public Schools, Preckwinkle began her career in politics with two unsuccessful bids for the City of Chicago’s 4th Ward aldermanic post in 1983 and 1987, respectively. In between these bids, Preckwinkle was appointed development officer for the Hyde Park Neighborhood Club in 1984. From 1985 to 1988, she served as an economic development coordinator for the City of Chicago. Preckwinkle was eventually named executive director for the Chicago Jobs Council in 1988. In 1991, Preckwinkle won the 4th Ward aldermanic seat, defeating a 17-year incumbent by 109 votes. She would go on to serve five terms, overseeing the redevelopment of the Kenwood, Oakland, Douglas, Grand Boulevard and Hyde Park neighborhoods. During Preckwinkle’s nineteen year aldermanic tenure, she became known as a Chicago City Council’s progressive member and a champion for affordable housing. Preckwinkle was also a co-sponsor of the living wage ordinances that passed the City Council in 1998 and 2002.

Preckwinkle’s political service earned her Best Alderman Award from the Independent Voters of Illinois-Independent Precinct Organization (IVI-IPO), a not-for-profit, multi-partisan, independent political organization, in 1993, 1995, 1997, 1999, 2005 and 2008. She was also the recipient of the 1997 and 2009 Leon Despres Awards, named after the legendary, iconoclastic Chicago alderman. Starting in 1992, she also served as the Democratic Committeeman for the 4th Ward. Preckwinkle declared her intention to run for Cook County Board President in 2008. Two years later, she won a hotly contested democratic primary for the seat. Preckwinkle swept through the November 2010 general election, becoming the first female to serve as President of the Cook County Board of Commissioners. She is married to Zeus Preckwinkle, has two children, and three grandchildren.

Toni Preckwinkle was interviewed by The HistoryMakers on April 19, 2012.

See how The Honorable Toni Preckwinkle is related to other HistoryMakers
Click Here To Explore The Archive Today!