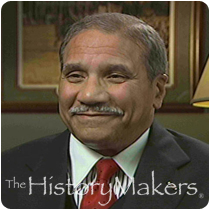 See how The Honorable Togo D. West, Jr. is related to other HistoryMakers
Donate Now

Former United States Secretary of the Army and former United States Secretary of Veterans Affairs Togo Dennis West, Jr. was born on June 21, 1942 in Winston-Salem, North Carolina to Togo D. West, Sr. and Evelyn E. Carter West. His grandmother named him after Japanese Admiral Heihachiro Togo, hero of 1905’s Russo-Japanese War. West grew up in East Winston, North Carolina where his mother was a teacher and his father was the principal of Atkins High School. West attended Atkins High School, graduating in 1959 as a member of the National Honor Society, valedictorian and an Eagle Scout with Bronze Palm. In 1965, he earned his B.S. degree from Howard University and worked briefly as an electrical engineer. West entered Howard University Law School and in 1967 worked as a legal intern for the Equal Employment Opportunity Commission. West became managing editor of the Howard Law Journal and graduated first in his class with his J.D. degree in 1968.

After clerking for Harold R. Tyler, Jr., a federal district court judge, West was commissioned a second lieutenant in the United States Army. West served in the Judge Advocate General’s Corps where he was recognized with the Legion of Merit and the Meritorious Service Medal. He subsequently practiced law with Covington & Burling in Washington, D.C. before being appointed associate deputy attorney general by President Gerald Ford in 1975. West served in several capacities in President Jimmy Carter’s administration including general counsel to the Navy from 1977 to 1979; special assistant to the secretary and to the deputy secretary of defense in 1979; and general counsel to the United States Department of Defense from 1980 to 1981. He returned to private practice as managing partner at Patterson, Belknap, Webb and Tyler and later served as senior vice president for government relations with Northrop Corporation. In 1993, West was appointed United States Secretary of the Army by President Bill Clinton. In 1998, President Clinton appointed West as United States Secretary of Veterans Affairs. West succeeded Eddie Williams as president and CEO of the Joint Center for Political and Economic Studies in 2004. In 2006, he founded TLI Leadership Group and served as its Chairman.

West was the recipient of numerous honors including being named Distinguished Eagle Scout in 1995. He later received scouting’s coveted Silver Buffalo Award and the Silver Beaver Award for his work with youth. West was married to the former Gail Berry.

West was interviewed by The HistoryMakers on February 8, 2007.

See how The Honorable Togo D. West, Jr. is related to other HistoryMakers
Donate Now
Click Here To Explore The Archive Today!