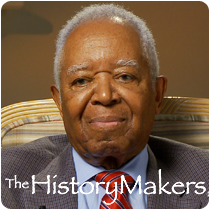 See how The Honorable Theodore Britton, Jr. is related to other HistoryMakers

Ambassador Theodore R. Britton Jr. was born on October 17, 1925 in North Augusta, South Carolina to Bessie B. and Theodore R. Britton, Sr. His family relocated to New York City in 1936. Britton left high school in January of 1944 to join the U. S. Marine Corps where he served in the Pacific Theater during World War II. After being discharged, he enrolled at New York University until the beginning of the Korean War. Britton was then called to active duty with the U.S. Marine Corps where he served until May of 1951. He then resumed his studies at New York University and graduated with his B.A. degree in banking and finance in February of 1952.

Britton worked as a mortgage officer and head of the mortgage department at Carver Federal Savings and Loan Association from 1955 to 1964. From there, he became president of the American Baptist Convention and a leader in the non-profit housing field. Britton was then invited to join the federal government by Harry Finger, who was head of Research and Technology in the Department of Housing and Urban Development (HUD). Britton closed his offices in New York and Pennsylvania and decided to join HUD in 1971 as Deputy Assistant Secretary for Research and Technology. As the HUD official managing international research, his volunteer program for the U. S. Information Agency attracted favorable attention. Britton was nominated by President Gerald R. Ford to serve as the U.S. Ambassador to Barbados and Grenada and as the U. S. Special Representative to Antigua, Dominica, St. Christopher-Nevis-Anguilla, St. Lucia and St. Vincent on November 17, 1974. Britton was elected as vice-chair of the Group on Urban Affairs at the Paris-based Organization for Economic Cooperation and Development in 1971, and later as president. His resignation as Ambassador was accepted by President Jimmy Carter in May of 1977.

Upon retirement, Britton was honored by the City Councils of Newark, New Jersey and Washington, D.C. He presented with the Congressional Gold Medal on June 30, 2012 in recognition of his services with the U.S. Marine Corps’ Montford Point Marines. Britton is a Life Member of the Second Marine Division, Montford Point Marine Association, and the Association for Intelligence Officers. On March 2, 2013, he joined the Marine Corps Commandant and other officials as a U. S. Navy ship was christened to honor the Montford Point Marines. Britton has served as Honorary Consul General for the Republic of Albania since 2006. He is also the Honorary Chairman of Kristal University in Tirana, Albania where her was awarded an Honorary Doctorate of Laws degree in 2009.

Britton was married in 1950 to the late Ruth B. A. Baker of Fort Worth, Texas. He is currently married to Vernell Elizabeth Stewart of Jacksonville, Florida.

Ambassador Theodore R. Britton was interviewed by The HistoryMakers on April 9, 2013.

See how The Honorable Theodore Britton, Jr. is related to other HistoryMakers
Click Here To Explore The Archive Today!