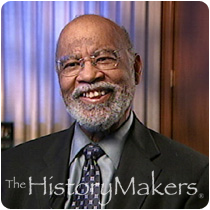 See how The Honorable Thelton E. Henderson is related to other HistoryMakers
Donate Now

Federal district court judge Thelton Eugene Henderson was born in Shreveport, Louisiana on November 28, 1933 to Wanzie and Eugene Marion Henderson. Henderson grew-up in the South central area of Los Angeles, California in an all-black neighborhood. He graduated from Jefferson High School in Los Angeles and was the recipient of a football scholarship to attend the University of California at Berkeley. In 1956, Henderson graduated with his B.A. degree in political science. Later, in 1962, Henderson earned his J.D. degree from Boalt Hall School of Law at the University of California at Berkeley and was admitted to the California Bar in January of 1963.

Both his high school counselor and football coach was alumnus of the University of California at Berkeley and encouraged him to attend their alma mater. While there, he became interested in African American history and helped to form an organization that catered to African American students. After graduating from college, he was drafted into the United States Army, where he served as a clinical psychology technician. Thereafter, he earned his law degree and was hired as an attorney with the civil rights division of the United States Department of Justice, where he served from 1962 to 1963. During his tenure with the Justice Department, Henderson investigated patterns of discriminatory practices in the South. Returning to Northern California, he practiced general law in private practice and was the directing attorney of the East Bayshore Neighborhood Legal Center in Palo Alto. From 1968 to 1976, Henderson was the assistant dean of the Stanford University School of Law. There, he helped increase minority enrollment to twenty percent of the student body and taught law classes.

In 1977, Henderson became a founding partner of Rosen, Remcho and Henderson in San Francisco, where he remained until 1980. He also taught administrative law and civil procedure at Golden State University of Law in San Francisco. In 1980, Henderson was appointed to the United States Federal Court and became the Chief Judge of the United States District of Northern California in 1990, thus becoming the first African American to reach that position. In 1998, he became Senior U.S. District Judge. Henderson was the recipient of the 2003 American Inns of Court Circuit Professionalism Award for the Ninth Circuit in recognition of a senior practicing lawyer or judge whose life and practice serves as an example for others.

He is divorced and has one son. He resides in Berkeley, California and enjoys fly-fishing.

Thelton Henderson was interviewed by The HistoryMaker on April 7, 2004.

See how The Honorable Thelton E. Henderson is related to other HistoryMakers
Donate Now
Click Here To Explore The Archive Today!