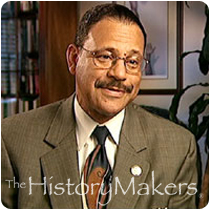 Politician Sanford Bishop, Jr., was born February 4, 1947, in Mobile, Alabama. His father, Sanford Bishop, Sr., was the first president of Bishop State Community College and his mother, Minnie, was a librarian. After completing high school, Bishop attended Morehouse College, earning a B.A. in 1968, and receiving a J.D. from Emory University in 1971. That same year he was given an honorable discharge from the Army's Advanced Reserve Officers Training School.

After earning his law degree, Bishop moved to Columbus, Georgia, in 1972, where he established the law firm of Bishop and Buckner. Five years later, he was elected to the Georgia House of Representatives, and remained there until 1990. Bishop then served a two-year term in the Georgia Senate before being elected to the U.S. House of Representatives in 1992, where he is currently serving his sixth term. Bishop has served on the House Intelligence Committee, the Agriculture Committee and is a permanent member of the House Veterans' Affairs Committee. Currently he serves on the House Appropriations Committee and is the chairman of the Democratic House Task Force on Homeland Security. Bishop has worked hard to promote agriculture, as well as to increase job opportunities and promote foreign trade.

Bishop is active on several committees, including the Congressional Black Caucus, the National Security Caucus and the Council on Foreign Relations. He has also received numerous awards, including the Spirit of Enterprise Award from the U.S. Chamber of Commerce; the Man of the Year Award from the Men's Progressive Club of Columbus, Georgia; and the Friend of the Children Award from the Child Advocacy Coalition. As an Eagle Scout, he has also been honored by the Boy Scouts of America for his distinguished career achievement. Bishop and his wife, Vivian, live in Albany, Georgia. They have one daughter.