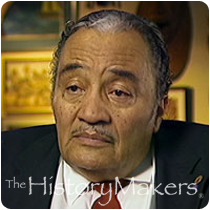 Distinguished professor and diplomat Sandye Jean McIntyre II was born in Pine Bluff, Arkansas, on September 18, 1923. He spent most of his youth in Cleveland, Ohio. McIntyre's father, Sandy John, was a professor and a minister, and his mother Gladys was a teacher. McIntyre was educated in the Cleveland public school system and received a B.A. degree in French in 1947 from Johnson C. Smith University in North Carolina. Returning to Cleveland, McIntyre attended Case Western Reserve University and earned an M.A. degree in 1948. In 1951, McIntyre was awarded a Fulbright Scholarship to study in France at the Université de Grenoble and the Université de Paris (the Sorbonne). He completed the requirements for a Doctorat d'Université, and was awarded “une équivalence doctorale.” McIntyre returned to Case Western Reserve University earning a Ph.D. in French in 1974. He has subsequently been a Senior Fulbright Scholar to Israel, Senegal, Mali, Gambia and Liberia.

Dr. McIntyre began his teaching career in 1948 at Morgan State University in Baltimore, where he still teaches. During the course of his career, he has been active in a number of programs promoting international education, including a 1951 appointment by his university to direct the Fulbright program. His oversight of this program at Morgan State has produced one of the highest numbers of Fulbright awards of any college or university in the United States, and definitely more than any other historically black institution of higher education.

Diplomacy has also been an important facet of McIntyre's career, including being named, in 1956, Honorary Consul of the Republic of Haiti, and, in 1970, Honorary Consul of the Republic of Senegal. McIntyre is the recipient of awards and honors from many countries, including France, which decorated him as a Knight and Officer in the prestigious “Ordre des Palmes Académques.” He was designated in 1980 as “International Consul of the Year” by the International Consular Academy.

McIntyre received numerous citations, awards and other forms of recognition for his excellence in teaching from local, national and international organizations. In 1957, he was chosen by the State Department to represent the teaching profession in the “Voice of America” worldwide broadcast as a member of the “Famous American Negro” series. The Institute of International Education gave him its 1974 “Individual Award” in recognition of distinguished service to international education and Morgan State University named an international award in his honor. McIntyre was listed by Baltimore Magazine as one of “Baltimore's Best and Brightest Brains” in 1978. He was designated in 1987 as the Maryland “Professional Employee of the Year” and received the Maryland Association for Higher Education’s “Outstanding Educator” award in 1989. He was the recipient in 1992 of the “Outstanding Leadership in the Profession” award presented by the Northeast Conference on the Teaching of Foreign Languages.

A World War II Army veteran, McIntyre was awarded the Bronze Star Medal with oak leaf cluster. He was the author of more than fifty French one-act comedies and traveled in all the major countries of the world.