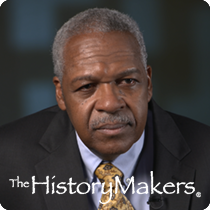 See how The Honorable Ronald L. Ellis is related to other HistoryMakers

Judge Ronald L. Ellis was born on July 4, 1950 in Lafourche Parish, Louisiana to Ella Mae Ellis and Herman Ellis. In search of better job prospects, Ellis’ father moved the family to New York City, where Ellis graduated from Cardinal Spellman High School in 1968. Ellis earned his B.Ch.E. degree in chemical engineering from Manhattan College in 1972, and entered New York University School of Law as a recipient of the prestigious Root-Tilden-Kern public interest scholarship.

During his second and third years of law school, Ellis became interested in the civil rights mission of the NAACP Legal Defense and Educational Fund, Inc. (NAACP LDF). After obtaining his J.D. degree, he worked briefly as a patent attorney for Exxon before joining the NAACP LDF in 1976, where he specialized in fair employment class action litigation. From 1984 to 1990, Ellis served as the organization’s Fair Employment Program director. Ellis went on to serve as the NAACP LDF’s Poverty & Justice Program director, where he worked on the landmark civil rights case Sheff v. O’Neil. In 1993, Ellis was sworn in as a magistrate judge for the United States District Court for the Southern District of New York. As a magistrate judge, Ellis handled pre-trial matters, including arraignment and determining bail. Ellis drew public criticism in 2009 for deciding not to remand fraudulent investor Bernie Madoff, in light of allegations that he had violated the terms of his bail. He also ruled on the City of New York’s lawsuit against documentary filmmaker Ken Burns, and refused to suppress a subpoena demanding that the BBC release unaired footage from its documentary Arafat Investigated.

In addition to his courtroom duties, Ellis mentored many law clerks, and served as an adjunct law professor at New York University School of Law, New York Law School and Columbia School of Law, often teaching courses on race and the law. He co-authored the chapter “Achieving Race and Gender Fairness in the Courtroom” in The Judge’s Book, and was a member of the Federal Bar Council and the Metropolitan Black Bar Association.

Ellis and his wife, Kathleen, have two sons, Jamil and Jelani, and a granddaughter, Alexandra.

Judge Ronald L. Ellis was interviewed by The HistoryMakers on October 27, 2016.

See how The Honorable Ronald L. Ellis is related to other HistoryMakers
Click Here To Explore The Archive Today!