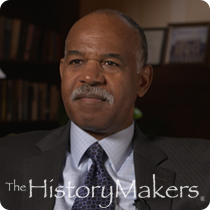 See how The Honorable Roger L. Gregory is related to other HistoryMakers
Donate Now

Gregory has served on numerous boards, including: Richmond Metropolitan Chamber of Commerce, Richmond Arts Council, Virginia State University Foundation, Richmond Bar Association, and Central Virginia Legal Aid Society. He served as president of the Friends Association for Children and the Black History Museum and Cultural Center of Virginia. Gregory was chairman of the Industrial Development Authority of Richmond and the executive committee of Richmond Renaissance. Gregory also sat on the board of ChildFund International and served on the board of the Virginia Historical Society.
He serves as trustee emeritus on the Board of Trustees at the University of Richmond. He serves on the Junior Board of Directors of the John Marshall Foundation. He is a member of the American Bar Association and was keynote speaker for the opening assembly at the 2005 ABA annual meeting in Chicago. He is a member of the National Bar Association and the Old Dominion Bar Association of which Gregory is a past president. He is a member of the State Bar of Michigan and Virginia.

He was the recipient of many awards, including the 1997 National Conference of Christians and Jews Humanitarian Award. He was featured in Ebony magazine as one of the “56 Most Intriguing Blacks of 2001.” In 2002, he received the Pioneer Visionary Award from the National Black Student Leadership Development Conference. In 2003, Judge Gregory received the Dominion Resources Strong Men and Women: Excellence in Leadership Award. Gregory was also awarded the Old Dominion Bar Association’s L. Douglas Wilder Vangard Award. He was also awarded the National Bar Association’s Gertrude E. Rush and Equal Justice Awards, and the Thurgood Marshall Award of Excellence. In 2015, he received the Washington Bar Association’s Charles Hamilton Houston Merit Medallion.

Roger L. Gregory was interviewed by The HistoryMakers on December 9, 2016.

See how The Honorable Roger L. Gregory is related to other HistoryMakers
Donate Now
Click Here To Explore The Archive Today!