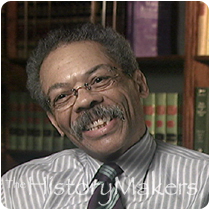 Judge Robert Mack Bell was born on July 6, 1943 in Rocky Mount, North Carolina to Thomas and Rosa Lee Bell. His father was a construction worker while his mother worked as a domestic and care giver. His parents separated when he was a young, and Bell was raised by his mother who moved to Baltimore, Maryland, in search of better jobs. He attended Baltimore public schools and graduated from Dunbar High School in 1961. While finishing his senior year at Dunbar in 1960, he, along with eleven other students, were recruited by Morgan State College students to participate in a sit-in at Hooper’s Restaurant, a segregated business. The students were subsequently arrested and convicted for trespassing. Bell was the lead defendant for an appeal of the verdict in the landmark civil rights case, Bell v. Maryland, which was argued before the U.S. Supreme Court and eventually ended racial segregation in Maryland.

After high school, Bell enrolled at Morgan State College in 1961 but was forced to take a year off from school after being hospitalized with tuberculosis. In 1963, he returned to Morgan where he was active in student government, and a member of the honor society and of the Alpha Phi Omega Fraternity. After he graduated second in his class with his A.B. degree in history and political science in 1966, he enrolled at Harvard Law School. The first student from Morgan to attend Harvard’s prestigious law school, Bell received his J.D. degree from there in 1969.

After passing the Maryland State Bar Examination in 1969, Bell was hired by Piper & Marbury, where he became the Baltimore law firm’s first black associate. In 1975, he became a judge on the District Court of Maryland for Baltimore City in his first judgeship. In 1980, Bell served as a judge for the Circuit Court for Baltimore, remaining until 1984. He was then appointed to the bench of the Court of Special Appeals in Maryland, serving in that post until 1991 when he was elected Judge of the Court of Appeals of Maryland. In 1996, Bell was appointed by Maryland Governor Parris Glendening as Chief Judge of the Court of Appeals, the state’s highest court. With that appointment he became the only active judge in Maryland to have served at least four years on all four levels of Maryland’s judiciary and the first African American to be named the state’s chief jurist.

Bell is a member of several legal organizations including the National, American and Maryland State Bar Associations. He has received numerous awards and recognition for his work in the legal field and lectures often at schools and at community functions.

See how The Honorable Robert Mack Bell is related to other HistoryMakers
Donate Now
Click Here To Explore The Archive Today!