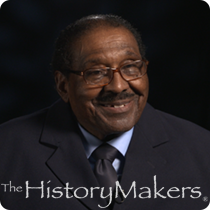 Robert G. Clark was interviewed by The HistoryMakers on May 26, 2017.