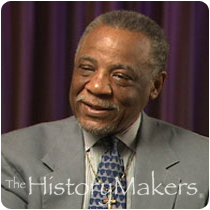 Favorite Color:
Blue
Favorite Food:
Fish
Favorite Time of Year:
Fall
Favorite Vacation Spot:
North Carolina
Favorite Quote:
If It's Been Done Before, I Can Do It.

Favorite Color:
Blue
Favorite Food:
Fish
Favorite Time of Year:
Fall
Favorite Vacation Spot:
North Carolina
Favorite Quote:
If It's Been Done Before, I Can Do It.

See how The Honorable Reverend Dr. W. Wilson Goode, Sr. is related to other HistoryMakers

The son of sharecroppers, W. Wilson Goode rose from a life of abject poverty to become the first black mayor of Philadelphia. Born near Seaboard, North Carolina, in 1938, Goode's family migrated north following the war to Philadelphia. After graduating from John Bartman High School, Goode became the first member of his family to attend college when he enrolled in Morgan State University. He received his B.A. in political science in 1961. In the early 1960s, he worked as a probation officer, insurance claims adjustor and building maintenance firm supervisor before serving a tour of duty in the U.S. Army in 1962. In 1968, he earned a master's degree in governmental administration from the University of Pennsylvania's Wharton School of Business.

Goode's political career took shape in 1969 when he was appointed executive director of the Philadelphia Council for Community Advancement. The council's mission was to revitalize neighborhoods and create affordable housing for the poorer citizens of Philadelphia. It was a position Goode took to immediately and one that earned him a great deal of notoriety. During his tenure, he organized outreach programs in education, employment and economic development. In 1979, the mayor of Philadelphia appointed Goode as head of the Pennsylvania Public Utilities Commission. While chairman of the commission, he had the unenviable task of investigating the accident at Three Mile Island. In 1980, he became the first African American appointed to the position of managing director of Philadelphia. His hands-on approach to city problems, such as sanitation and urban decay, further increased his popularity. Goode was elected mayor of Philadelphia in 1983. His support reached across racial and economic lines and he served two terms as mayor, leaving office in 1992.

Goode remains a pillar of the Philadelphia community. He received his doctorate of ministry in May 2000. He is the senior adviser on faith-based initiatives and serves as chairman of the Free Library of Philadelphia. He and his wife, Velma, reside in Philadelphia.

See how The Honorable Reverend Dr. W. Wilson Goode, Sr. is related to other HistoryMakers
Click Here To Explore The Archive Today!