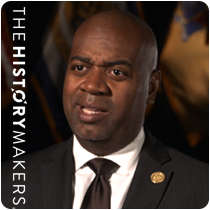 Political leader Ras Baraka was born on April 9, 1969 in Newark, New Jersey to writer and playwright Amiri Baraka and poet Amina Baraka. He received his B.A. degree in political science from Howard University in 1991; and earned his M.A. degree in education supervision from St. Peter’s University in Jersey City in 1994. In 1992, Baraka served as the editor of In the Tradition: An Anthology of Young Black Writers. In 1998, Baraka was featured on singer Lauryn Hill’s album The Miseducation of Lauryn Hill and in 2003, he performed a collection of poems called Black Girls Learn Love Hard at the Geraldine R. Dodge Poetry Festival. The volume was dedicated to Baraka’s sister, Shani Baraka, who was murdered in 2003. Baraka has participated in the National Political Hip-Hop Convention from its inception in 2004.

Prior to his political career, Baraka worked as an English and history teacher for Newark Public Schools. In 1994, at the age of twenty-four, Baraka ran for mayor of Newark, New Jersey, but was defeated by Sharpe James. Baraka was elected as Council Member At-Large on the Municipal Council of Newark in 2005. From 2007 to 2013, Baraka served as the principal of Central High School in Newark. He was re-elected as a South Ward Council Member in 2010, a position he held until 2014. In July of 2014, Baraka became Newark’s 40th mayor, on a platform of improving the city’s public school system, economic growth, and criminal justice reform. During his tenure, Baraka launched the City’s first police Civilian Complaint Review board and unified the City’s police and fire departments into a single public safety department. In 2017, Baraka initiated the Hire. Buy. Live. Newark plan to stimulate the city’s economic development. Baraka was re-elected for a second mayoral term in 2018.

In 2015, Baraka was named Most Valuable Mayor on The Nation’s Most Valuable Progressives list. He was also featured on Ebony magazine’s Power 100 list. In 2017, Baraka was presented with an honorary degree from Montclair University. He also served on the board of trustees of Newark Trust.

Ras Baraka was interviewed by The HistoryMakers on December 4, 2017.