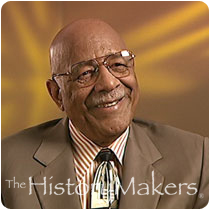 Favorite Color:
Blue
Favorite Food:
All Food
Favorite Vacation Spot:
Home
Favorite Quote:
As For Me And My House, We Will Serve The Lord.

Favorite Color:
Blue
Favorite Food:
All Food
Favorite Vacation Spot:
Home
Favorite Quote:
As For Me And My House, We Will Serve The Lord.

See how The Honorable R. Eugene Pincham is related to other HistoryMakers
Donate Now

R. Eugene Pincham, human rights activist, lawyer, former judge of the Circuit Court of Cook County, Illinois, and justice of the Appellate Court of Illinois, was a strident critic of the criminal justice system. He was born on June 28, 1925 in Chicago, Illinois but grew up impoverished in Alabama. After his high school graduation in 1942, Pincham became interested in becoming a lawyer. He attended college at LeMoyne College in Memphis, Tennessee, and in 1944, he transferred to Tennessee State University in Nashville, where he earned his B.S. degree in political science in 1947. In 1948, Pincham married his college sweetheart, Alzata C. Henry, and that same year enrolled in Northwestern University School of Law. Despite the fact that he had to wait tables at the Palmer House Hotel and shine shoes as a full-time student, Pincham earned his J.D. degree in 1951.

Pincham then began to practice law as an attorney in the state and federal courts. In 1954, he accepted an offer to practice law with the firm that became Evins, Pincham, Fowlkes and Cooper. In 1965, Pincham was admitted to the Bar of the U.S. Supreme Court. In 1976, Pincham became a Circuit Court of Cook County judge and was assigned to the Criminal Division, where he served until 1984. He went on to become a justice of the Appellate Court of Illinois. There, Pincham gained a reputation as one who sought justice for the poor as well as the rich. Pincham resigned from the bench in 1989 and unsuccessfully sought the Democratic Party’s nomination for president of the Cook County Board of Commissioners. In 1991, he became the Harold Washington Party’s nominee for Mayor of Chicago. Although he lost, Pincham carried nineteen of the city’s fifty wards - a powerful endorsement from the African American community.

A member of the American Civil Liberties Union and a lifetime member of the NAACP, Pincham continued to lectured and instructed in trial and appellate techniques and advocacy after his retirement. He received numerous awards for his professional and community service and activism. Pincham passed away on April 3, 2008 at the age of 82.

See how The Honorable R. Eugene Pincham is related to other HistoryMakers
Donate Now
Click Here To Explore The Archive Today!