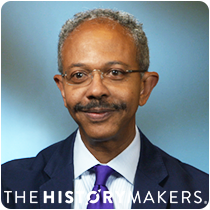 See how The Honorable Peter C. Harvey is related to other HistoryMakers
Donate Now

Lawyer Peter C. Harvey was born in the Bronx, New York on February 2, 1958 to Lillian Holland Harvey and Reverend Raymond Harvey. In 1948, Harvey’s mother established at the Tuskegee Institute the first baccalaureate degree program in nursing in the State of Alabama.. His father also worked on campus, serving as chaplain of the Tuskegee Institute Chapel. Harvey went on to earn his B.A. degree in political science from Morgan State University in Baltimore, Maryland in 1979, and his J.D. degree from Columbia Law School in New York City in 1982.

After graduation, Harvey was hired as an associate at the New York law firm of Kaye, Scholer, Fierman, Hays and Handler, where he worked on intellectual property litigation cases. In 1986, Harvey joined the United States Attorney’s Office for the District of New Jersey as an assistant United States attorney. From 1986 to 1989, he worked on organized crime and drug trafficking. In 1989, Harvey joined the State of New Jersey Office of the Attorney General. As special assistant to Attorney General Robert Del Tufo, Harvey helped draft a landmark assault weapons regulation bill, which was passed by the New Jersey Legislature and signed into law by Governor Jim Florio in May, 1990. That same year, Harvey returned to private practice as an associate at the law firm of Riker Danzig Scherer Hyland and Perretti LLP. In 2002, he was appointed first assistant attorney general of New Jersey where he directed the Division of Criminal Justice. On July 10, 2003, Harvey was sworn in as the fifty-fourth New Jersey attorney general, becoming the first African American to hold this office. During his three year term, Harvey focused on police reform as well as anti-gang and anti-fraud initiatives. Harvey resigned in 2006 and returned to private practice as a partner at the law firm of Patterson Belknap Webb and Tyler LLP.

Harvey served as an active member of the Morgan State University Alumni Association. In 2012, the university named him alumnus of the year. Harvey has retained memberships in the National Bar Association, American Bar Association and National Association of Attorneys General.

See how The Honorable Peter C. Harvey is related to other HistoryMakers
Donate Now